ElderBranch Explores the Challenges and Promises of LGBT Senior Living

Though there are over 3 million lesbian, gay, bisexual and transgender seniors today, there are relatively few long-term care facilities that cater to or even welcome this group of seniors. ElderBranch spoke with Rose Villa in Portland, Oregon, to learn about how they are promoting an environment of LGBT-friendly senior living in their facility. 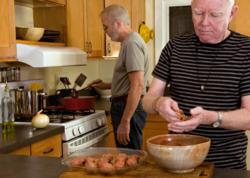 The fact that we are friendly to gay and lesbian folks is not enough. We have to be way more proactive so that everyone knows they’ll be treated with respect and that they’ll be welcome here, because that is not the case in the world at large.

In an initial piece on LGBT senior living, ElderBranch reported that the number of LGBT adults over 65 currently exceeds an estimated 3 million and is expected to double by 2030. Nevertheless, there are relatively few senior living facilities that cater to or even welcome this group of seniors, and space in existing facilities falls far below potential demand.

As a follow up, ElderBranch spoke with Vassar Byrd and Rachel Rushing to learn about LGBT senior living at Rose Villa. Rose Villa is an LGBT-friendly senior living facility in Portland, Oregon.

Traditional senior living facilities are not always particularly welcoming to gay and lesbian seniors. They may force couples to occupy separate units since they aren’t married, or they may be staffed with caregivers who either lack training or sympathy for members of the LGBT community. Resident seniors may also set an unfriendly atmosphere. At times, the inability to find a supportive long-term care environment can drive seniors back into the closet.

Financial resources can also be harder to come by for many LGBT seniors. Due to federal legislation, lesbian and gay seniors lack access to partners’ social security benefits and must pay estate taxes — even if they are legally married.

There are a number of long-term care communities with an exclusive LGBT focus that are springing up around the country. Though interest in such communities is growing, several facilities have run into a number of obstacles — mainly that they have been affected by the same housing market downturn that has affected the housing market more broadly. They’ve also had problems with poor management and funding.

Lower-cost housing projects have been more successful. Typically, these are set up as a public-private partnerships or as non-profit ventures.

A growing number of elder care facilities are making efforts to welcome LGBT seniors within their existing resident base. While these facilities are not exclusively LGBT communities, they are deemed LGBT-friendly. One such community is Rose Villa in Portland, Oregon, which attempts to provide a welcoming environment to all.

Rose Villa is a continuing care retirement community where assisted living services and 24-hour nursing are offered on the same campus as independent living. This facility has long-maintained an open-door, welcoming environment for all types of seniors. However, one particular incident prompted Rose Villa to be much more vocal in its support of LGBT seniors.

Upon learning about how a lesbian couple was told by another facility that they would have to pretend to be sisters or roommates, Vassar Byrd, CEO of Rose Villa, was flabbergasted. At her next staff meeting, she voiced, “The fact that we are friendly to gay and lesbian folks is not enough. We have to be way more proactive so that everyone knows they’ll be treated with respect and that they’ll be welcome here, because that is not the case in the world at large.”

Through education and training for both staff members and residents, Rose Villa has created a welcoming atmosphere for all seniors. Rose Villa continues to push the boundaries when it comes to promoting an open environment – most recently, it has engaged in designing a program to educate its residents on transgender individuals.

About ElderBranch
ElderBranch is an online information portal that helps people find and evaluate long-term care providers. ElderBranch’s mission is to support users in making the best decision possible for themselves and their loved ones.