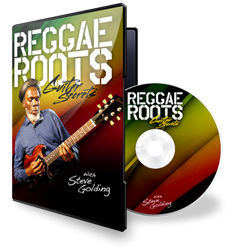 In fact, Steve Golding has had the distinct privilege of personally knowing, playing, and performing with both of these legends. In addition, he has given guitar lessons to Mr. Marley’s son, Ziggy.

The virtual guitar lesson company known as Guitar Control now has a new set of lessons that is available for order as of May 29, 2013. The title is Reggae Roots Guitar Secrets and the teacher in this set is the talented Steve Golding. So, this DVD is obviously ideal for anyone who would like to learn how to play reggae on guitar while being instructed by a renowned and respected authority on the subject.

Reggae is an upbeat style of music with roots that can be traced to many places including Africa, the U.S., and areas in the Caribbean, although Jamaica is usually acknowledged as its official home. The unique sound of reggae guitar is as unmistakable as the backbeat itself. Furthermore, as far as categories of music go, reggae can be learned relatively fast as the chord structure and tempo typically isn’t too complex compared to other styles.

Though many people know reggae music when they hear it, it wasn’t until artists like Bob Marley and Peter Tosh came along that it was popularized all over the planet. In fact, Steve Golding has had the distinct privilege of personally knowing, playing, and performing with both of these legends. In addition, he has given guitar lessons to Mr. Marley’s son, Ziggy. So, Guitar Control certainly seems to know their stuff when it comes to selecting suitable instructors for the type of music they teach in each set.

This reggae guitar lesson should also probably be good for people who would like to learn how to play rhythm guitar as well, because that’s a big part of what is taught. Another nice aspect of these tutorials is the reggae guitar tabs that are provided in order to clearly show where the fingers go on the fretboard. They’re an effective tool for players of all skill levels to begin practicing reggae guitar chords.

For additional information regarding the details of Reggae Roots Guitar Secrets, those who are interested can check out http://www.guitarcontrol.com/reggae/main.php in order to learn more. So, for those that are searching for professional reggae guitar tips, it seems that this set is the only thing they’ll need to get started. Oh yeah, and a guitar might help!