Tamils for Obama: What's Needed to Get Eelam Referendum Going is Obama's Participation

President Obama initiated the referendum that led to the independent state of South Sudan. Tamils for Obama, in a letter to the president, suggests that the same thing can be accomplished in northeastern Sri Lanka. 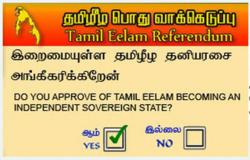 Sri Lanka also had a bloody civil war, and again with an oppressive ruling majority trying to subjugate, uproot, and chase out their resented minority. In the case of Sri Lanka the resented minority was the Tamils

South Sudan's referendum on independence was a good idea and had a good result, said Tamils for Obama in a letter to the president. Now, the same good idea should be applied in northeastern Sri Lanka

The letter started "South Sudan had a bloody civil war, with an oppressive ruling majority trying to subjugate, uproot, and chase out their resented minority. After decades of conflict, a referendum--which you initiated--led to a separation and a new country called South Sudan. Overall this was a good result, and a feather in your cap."

The letter then noted that northeast Sri Lanka also had a bloody civil war, and again with an oppressive ruling majority trying to subjugate, uproot, and chase out their resented minority. In the case of Sri Lanka, the resented minority was the Tamils, the letter noted, and Tamils are the victims of the national government's ongoing campaign of oppression and genocide.

"We think that what is needed is another referendum and another new country," Tamils for Obama said in the letter. This time, the new country would be Tamil Eelam. "You have done it before," the group wrote to the president, "and you can do it again."

The letter also noted that Chief Minister Jayalalithaa and former foreign minister of India Yashwant Sinha both said that Tamil Eelam “is not far away.”

"These two heavy-weights opposed even the idea of a separate Tamil homeland in the past," the letter went on, "and now both are expressing what we think is the tide of opinion in south Asia: that there must be a referendum establishing a self-ruling Tamil homeland is the wish of most of the people in northeastern Sri Lanka."

"Almost every Tamil in the world--in Sri Lanka, India, and the diaspora in scores of other countries, including us in the US--is in favor of this referendum," the letter also said.

Tamils for Obama concluded by telling the president, "We think that the missing element is your participation. We urge you to do as you did with South Sudan."