AncestorEbooks announces the newest App for genealogy in time for the Southern California Jamboree in Burbank, CA 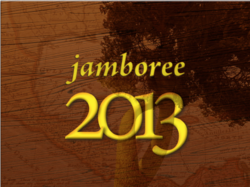 "Discover the dash" (meaning the dash between an ancestor's birth year and death year on a headstone), our whole history lies within it. Elder Bradley D. Foster

AncestorEbooks announces the ‘jamboree 2013’ App for iPhones and iPads that is available in time for the Southern California Genealogical Society Jamboree which begins June 7 at 12:00pm in the Los Angeles Marriott Burbank Airport Hotel, 2500 Hollywood Way, Burbank, CA, from Friday through Sunday, June 7-9th.

The SCGS introduced the first mobile App for their 2011 Jamboree; now many genealogy conferences provide an App to help with registration and informational needs. The jamboree 2013 App is available through iTunes as, for iPhones and iPads and is available without cost to all subscribers to their newsletters. (Apps for Android, BlackBerrys or other smartphones can get a direct link from here)

The SCGS Jamboree is among the largest events in the U.S.A. and is expected to draw 1600 attendees, speakers, exhibitors, and volunteers according to their online newsletter. [genealogyjamboree.org/] This year’s theme is Genetic Genealogy in 2013.

SCGS and International Society of Genetic Genealogy (ISOGG) have joined to bring Dr Spencer Wells and Dr Henry Louis Gates, Jr., as speakers for this event.

According to the Legacy News autosomal DNA testing is the New Frontier in Genetic Genealogy.

This new App will make attending and volunteering to this nonprofit jamboree much easier with daily schedules, maps, and synopsis of each of the 150 classes scheduled and for 60 speakers. With speakers slated to talk on everything from Angela Walton-Raji’s work on Native American & African American family history to Bruce Buzbee, founder and president of RootsMagic, Inc. and Ken Chahine, PhD, JD of AncestryDNA, it would be quite easy to miss an essential speech without the handy calendar.

With the growing trend of genealogy research in the U.S. is the need for researchers to go “into the field” reports Cristina Besendorfer of AncestorEbooks, “Online registries are wonderful resources for finding where our ancestors were buried. Websites such as Findagrave.com or BillionGraves.com will provide most gravesite information such as names and dates for urban dead, however in farming communities families often had their own private cemetery far from internet services. Having an App for recording information, saving photos of the gravestones, keeping GPS locations etc can be very helpful especially when the information can be downloaded to a repository of information once internet service is reestablished.”

“Funeral home records at along with obituaries that were published by the home, can lead to where an ancestor has been buried, as well as other relatives who lived at the time of death, however many family lines end childless or with the final members of that line dying because of illness or war.” continues Mrs Besendorfer, “It is not only important but vital to go to the neighborhoods where our ancestors lived to verify information that has been passed down by word of mouth.”

“Being able to visit with living neighbors, to map unincorporated cemeteries, gather interesting stories and walk where our ancestors walked is the part of research that stirs the imagination and breaths life into stories. The advantage is even greater when being able to find where in the Jamboree a certain class or speech is being held.” Concluded the founder and owner of AncestorEbooks.