State-level academic program for four-year-olds brings the benefits of individualized interactive instruction to the home through the use of technology. 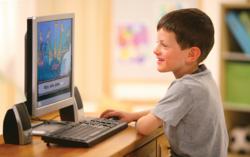 This study shows that the impact of the UPSTART program is substantial.

Can educational technology used at home measurably impact the school readiness of preschool children? According to a new independent report evaluating the results of the state-level UPSTART (Utah Preparing Students Today for A Rewarding Tomorrow) program, preschoolers using home-based educational technology and support from the Waterford Institute demonstrated better literacy skills and stronger literacy growth rates than children who did not participate in the program.

The report by the nonprofit Evaluation and Training Institute (ETI) documented the third year results of UPSTART, which was established as a pilot demonstration project by the Utah state legislature. UPSTART uses home-based educational technology provided by the Waterford Institute, a nonprofit research center in Salt Lake City, to develop the school readiness skills of children the year before they go to kindergarten. Nearly two-thirds of the children enrolled in the third year of UPSTART were from low-income families. Participants were required to use the computer-based preschool program at home at least 15 minutes a day, five days a week.

A sample of children who participated in UPSTART and a control group were measured on two tests of early literacy skills: the Brigance Inventory of Early Development and the Bader Reading and Language Assessment. They were post-tested approximately one year after their pre-test.

The ETI report documents findings about UPSTART’s impact on literacy skills measured at the beginning of kindergarten. According to the report, in year three, UPSTART participation continued to show strong impacts on improving the phonics skills of preschool children. Post-test results showed that the UPSTART treatment group performed significantly better than the control children on nine of the 10 Brigance subtests and the Total Brigance. The largest impact observed was in the development of vocabulary. Overall, UPSTART children scored an average of 28 points higher on the Brigance post-test compared to control group children.

In addition, the UPSTART treatment group achieved gains across all three of the phonological awareness domains measured by the Bader: the ability to recognize rhymes; the ability to blend phonemes; and the ability to segment phonemes.

“This study shows that the impact of the UPSTART program is substantial,” said Dr. Benjamin Heuston, president of the Waterford Institute. “A 2012 report by Mark W. Lipsey and colleagues shows the highest effect size is for interventions that work with individual students, as compared to small group, classroom, or whole school interventions. As part of this study, effect sizes were calculated to describe the magnitude of the difference in performance between the UPSTART students and the control students. Not only were the effect sizes larger for the UPSTART students, but they were nearly twice as large as the effects for individualized learning or tutoring tend to be. This demonstrates that it’s not just the type of instruction, but the quality of the individualized interactive instruction that’s important as well.”

Waterford Research Institute (http://www.waterford.org) is a nonprofit research center dedicated to providing every child with the finest education through the development of high-quality educational models, programs, and software. Founded by Dr. Dustin Heuston in 1976, Waterford uses rigorous research to build award-winning, proven educational programs. Since creating the first educational videodisk, Waterford continues to be at the cutting edge of technology-delivered instruction. Today, Waterford Research Institute is an international leader in preschool through second grade software for reading, math, and science programs and has reached millions of children globally. For more information, visit http://www.waterford.org or contact 801.349.2200.