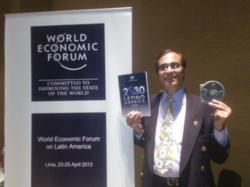 José Luis Cordeiro, Director of the Venezuela Node of The Millennium Project

Peru and Panama are the champions of growth [in the region]. Mexico does not want to lag behind.

“Delivering Growth and Strengthening Societies” was the theme of the latest World Economic Forum (Davos) for Latin America. It was hosted by the government of Peru and attended by over 700 participants from Latin America and beyond. Besides the president of Peru, Ollanta Humala, the presidents of Mexico, Enrique Peña Nieto, and Panama, Ricardo Martinelli also participated. There was an important government presence and ministries and secretaries of state from major neighboring countries like Brazil, Chile and Colombia, plus private sector figures from Mexico to Argentina, and several participants from Asia, Europe and North America. All the major regional intergovernmental organizations were also represented by their top figures, like the Andean Development Corporation (Enrique García), Inter-American Development Bank (Luis Alberto Moreno), Organization of American States (José Miguel Insulza), and the United Nations Economic Commission for Latin America and the Caribbean (Alicia Bárcena).

The discussions centered on many areas like social inclusion, economic integration, and regional development. There were special sessions on tourism, environmental issues, innovations and even gastronomy, thanks to the current boom of Peruvian gastronomy. The sessions on mining, change of trade patterns, and gender gap drew some of the largest crowds of both politicians and business people. The presidents and economic ministers of Chile, Colombia, Mexico and Peru agreed to deepen the newly created Pacific Alliance. Peruvian president Ollanta Humala said that “we are trying to build a country of intellectual capability, not just of natural resources,” while Mexican president Enrique Peña Nieto explained that currently “Peru and Panama are the champions of growth [in the region]. Mexico does not want to lag behind.”

José Luis Cordeiro, Director of the Venezuela Node of The Millennium Project and coordinator of the study, presented the scenarios “Latin America 2030”. Several WEF participants contributed to the report, including Mexican President Peña Nieto, OAS’s Insulza and UN ECLAC’s Bárcena. The report was produced by The Millennium Project, a global futures research think tank. It considers possible future developments for Latin America and the world, including four scenarios for the region in the year 2030. “Latin America 2030” is a compendium of information that summarizes two years of work and commentaries from over 70 participants from around the world, and visualizes different possibilities for the future of Latin America.

The World Economic Forum (WEF) is a Swiss non-profit foundation, based in Geneva. It describes itself as an independent international organization committed to improving the state of the world by engaging business, political, academic and other leaders of society to shape global, regional and industry agendas. The WEF is best known for its annual meeting in Davos, and now also regional meetings all over the world, including the ones in Latin America.

The Millennium Project is a global participatory think tank that produces the annual State of the Future report, the Futures Research Methodology series, Collective Intelligence and related software, and special studies. The Millennium Project has about 50 Nodes around the world that identify participants, translate questionnaires and reports, conduct interviews, initiate and conduct special research, workshops, symposiums, and advanced training. The Millennium Project’s mission is to improve thinking about the future and make that available through a variety of media for feedback to accumulate wisdom about the future for better decisions today.