Creating entrepreneurs was an unexpected result of the training provided in the Rocklin High School Technology Lab, supported by the Sierra College STEM Collaborative. As the school year ends, students who invented race car tow hooks, medical lab testing equipment and other projects will use applied critical thinking and technical know-how to build their businesses and make career plans. 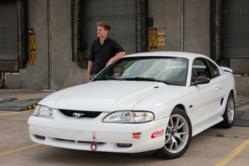 I liked working on a project that had a purpose.

When Pete Oxenham, a senior at Rocklin High School, graduates this weekend he'll have more than a diploma; he'll also have a new business. Oxenham posted on his blog about a race car tow hook he created in a high school class and other racers asked how they could buy one. His entrepreneurial pursuits were fueled by the first-class technology lab assembled by teacher Dan Frank with support from the Sierra College Science, Technology, Engineering and Math (STEM) Collaborative.

The goal is to inspire students, explained Carol Pepper-Kittredge, Director, Center for Applied Competitive Technologies (CACT), Sierra College. “High school students are more likely to pursue design, engineering, manufacturing and other STEM careers if they are given the opportunity to use industry-standard tools to solve real world problems,” said Pepper-Kittredge. "The lab is also inspiring innovation and entrepreneurship."

Oxenham used lathes, presses, punches and computer numerical control (CNC) mills in the Rocklin High School lab to create several prototypes that would work on the bumper of a 2004 or earlier model of Ford Mustang. “I wanted to build a flexible tow hook that didn’t modify the bumper and could be removed in 30 seconds,” said Oxenham. “Once I got a tow hook that worked, I recreated the design in SolidWorks® so I could save the plans and measurements.”

Using a coaching style of teaching, Frank aids students in innovating. “I came to Mr. Frank with my ideas,” said Oxenham. “Based on his experience, he asked questions and suggested alternative materials or methods.”

In just three weeks, Oxenham has sold eight tow hooks and has several more on order. He is also working on designing a wheel spacer to widen the wheel base for better suspension. Like any entrepreneur, he reports that it is stressful to juggle school, his job working on lighting systems, the burgeoning business and development of new products. “I enjoy making new parts for my cars but I’ll be keeping my other job after I graduate,” said Oxenham.

Paulo Buencamino, a junior, learned about the need for a better way to hold medical lab samples through discussions with his father, Jaime Buencamino who works as a Liquid Handling and Automation Product Specialist. Paulo became intrigued with inventing a better holder that clipped to the sample testing machine.

“My Dad asked me if I was interested in taking on the challenge,” said Buencamino. “He saw an opportunity for me to solve a real problem using the skills I’ve built in three years in Mr. Frank’s Engineering Support Technology classes.”

The holders are used to handle liquids for medical sampling equipment. They are 5” long, 3.5” wide and 1.5” high. “The base is non-standard in shape, must easily clip on the machine and be designed to reduce spills,” said Buencamino. “I modeled a 3D prototype in SolidWorks® and used the CNC Mill to a make a prototype in butter board. I readjusted the design and am running it again on butter board before making it in aluminum.”

Although he hasn't started a company, Buencamino says that this experience has reinforced his plans to study Mechanical Engineering once he graduates from high school and eventually work in business. “I liked working on a project that had a purpose,” said Buencamino. “It gave me sense of pride thinking that the product I develop may be used in hospitals.”

According to Dan Frank, many of his students are applying what they’ve learned to challenge themselves and it is the first step to developing entrepreneurs. “Robert Metzler, a senior, is making aluminum cases to protect telephones,” said Frank. “Emma Yenerich, a freshman, took on the project of fundraising for materials and building new wood decks for the Associated Student Body trailers.”

“Trevor Harding and Skyler Gonzolez, both sophomores, led a team of students in building a water horse that makes water available to football players out on the field. They developed a design that was both movable and durable, cut the steel, selected parts and manufactured it.”

The Sierra STEM Collaborative has supported Rocklin High School in upgrading the lab. “Sierra College has been instrumental in helping us build a lab in which we can teach both milling and turning on manual and CNC equipment, as well as rapid prototyping on our 3D printer, laser cutter and CNC router,” said Frank.

“Students develop design and programming skills using the latest versions of SolidWorks® and Mastercam®. Gaining the planning and critical thinking skills, having hands-on experiences and seeing how their projects can make a difference are keys to enticing students to consider STEM careers or starting-up new businesses.”

Student uses 3D modeling to refine his design of a medical device.Using equipment in labs provided by the Sierra STEM Collaborative, a Rocklin High School student invents a holder for medical sampling devices.

Student makes 3D model of a medical device holder he invented.Support from Sierra College STEM made it possible for Paulo Buencamino, a Rocklin High student, to invent a holder for medical sampling equipment.