Animal Support is praised by the exotic animal advocacy and rescue organization PAWS. Thanks to their recent support, PAWS will continue its important work on behalf of animal protection and welfare. 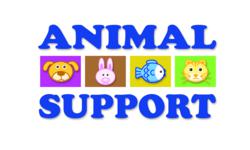 The Performing Animals Welfare Sanctuary (PAWS) thanks Animal Support and its co-founders Dr. Michael Omidi, Maria Abaca, and Julian Omidi for their recent sponsorship. PAWS is internationally recognized as a leader in animal welfare and is dedicated to the rescue, protection and care of exotic animals.

“The term ‘rescue’ is often construed as the happy ending, the final step to a better life for a suffering animal,” says Ed Stewart, PAWS co-founder and President. “At PAWS, the rescue is only the beginning of a long, dedicated endeavor to provide the best quality of life for victims of captivity. We’d like to thank the Omidi brothers and Animal Support for their support of our mission: the preservation of wild species and their habitat and the promotion of public education about captive wildlife issues.”

For the past 30 years, PAWS has been a champion for exotic animals, and has not only ensured the protection and safety of performing animals, but has also worked internationally for animal preservation and rescue. PAWS assisted with the founding of habitats in India, Cambodia, Africa and Mexico, where exotic animal poaching is rampant.

Co-founder Pat Derby began her journey of animal rescue and protection after she became aware of the abusive practices of entertainment industry animal trainers and handlers. Being a renowned trainer herself who worked on many notable television shows in the 1970s and always employed nurturing and respectful methods for training animals, she felt moved to expose the neglectful and cruel techniques of many in the profession. Her book, “The Lady and the Tiger,” was the first publication to reveal the extent of animal abuse within television and movies. Since the publication of her book and the founding of the exotic animal sanctuary, PAWS has been instrumental in entertainment industry animal training regulations with regard to animal treatment.

PAWS is not generally an open facility, but it is hosting several public events in the near future, including the Wines, Tigers and Beers event in June; the Elephant Grape Stomp n’ Chomp in October; and a Holiday Open House in December.