The Lake Placid-based Regional Office of Sustainable Tourism has found that explorers, mother nature and technology have created recent improvements and additions in the Adirondacks rock climbing paradise. 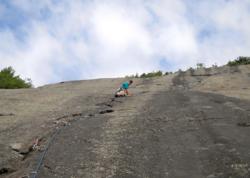 “The classic route Trap Dike, which previously included some brushy scrambles, now looks like someone took a giant claw and cleared out all of the debris,” said Lawyer.

Though the classic rock climbing routes of the Adirondacks remain steadfast as the rock itself, tenacious explorers, mother nature and technology have created recent improvements and additions to this rock climbers’ paradise.

The mountains and lakes of the Adirondack Park landscape draw millions of visitors each year to hike, paddle and otherwise experience the unique protected landscape, and the rocky cliffs and slabs of New York’s highest mountains arguably represent some of the finest traditional rock climbing in the country.

Rock climbing season in the Northeast has begun, and the local gear shops are buzzing with activity. A stop at a local favorite, The Mountaineer in Keene Valley, provides an overview of the new technology that has evolved to support the increased interest in rock climbing. “Everything is smaller and lighter,” said Chuck Bruha, longtime member of the Mountaineer’s sales team, as he showcased a few of the latest trends in rock gear. From magnet locking carabiners to lightweight, combination rock/cycling helmets to a vast array of LED headlamps, the technology has advanced to allow climbers to carry the many items required to ascend cliffs safely, at a fraction of the weight it would have represented just a few years ago.

In a recent conversation with Jim Lawyer, co-writer with Jeremy Haas of the guidebook “Adirondack Rock, A Rock Climber’s Guide”, he noted that a number of new climbing routes have been developed in recent years, including a number of new cliff developments at Silver Lake in the High Peaks, and an increase in the total to over 200 routes at Crane Mountain in the southern Adirondacks, rivaling the high concentration of routes at popular Pok-O-Moonshine and Chapel Pond.

When asked about the impact of recent “superstorms” on the classic rock routes of the region, including Tropical Storm Irene in August of 2011, Lawyer indicated that the extreme weather might actually have been a benefit. “The classic route Trap Dike, which previously included some brushy scrambles, now looks like someone took a giant claw and cleared out all of the debris,” said Lawyer. “Now that climb is clean, featureless rock all the way to the top; the slab looks like someone took a 200-foot wide parking lot and tilted it up.”

All route additions and other updates are included on the website adirondackrock.com, the home site for the comprehensive rock climbing guidebook by Lawyer and Haas, now available in its second printing.

Another valuable resource for Adirondack rock climbers, updated route closures due to peregrine falcon nesting sites are always provided by the New York State Department of Environmental Conservation on their website at http://www.dec.ny.gov.

From the Barkeater cliff to Washbowl to the Beer Walls to the Chapel Pond Slab, the high peaks of the Adirondacks are a must-visit for rock climbing enthusiasts of all ability levels. The region boasts a number of licensed guides to show novices the ropes, and to provide their expertise to lead beginners and experienced climbers to the secluded backcountry and classic crags of the Adirondack wilderness.

For more information about rock climbing and other activities in the Lake Placid region of the Adirondacks, plus lodging packages and online reservations, visit lakeplacid.com.