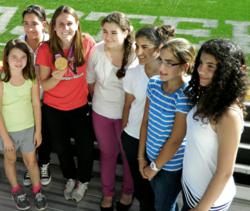 “I am excited to be spending time at the Academy this summer and look forward to contributing to the program both on and off the pitch,” said O’Reilly.

U.S. Women’s National Team Midfielder and three-time Olympic gold medalist Heather O’Reilly will be appearing at the Berkshire Soccer Academy for Girls in Otis, MA on Monday, July 22. The appearance will take place during the Academy’s third session, which runs from Saturday, July 20 – Thursday, July 25. O’Reilly will work with the girls on the field and speak with them about her own experiences in youth soccer all the way up through playing at the highest levels of international soccer. O’Reilly, who now plays for the Boston Breakers of the National Women’s Soccer League (NWSL), was recently named NWSL Player of the Week.

“I am excited to be spending time at the Academy this summer and look forward to contributing to the program both on and off the pitch,” said O’Reilly.

About the Berkshire Soccer Academy For Girls:

The Berkshire Soccer Academy for Girls is located in East Otis, Massachusetts. Girls at Berkshire Soccer Academy receive elite training at top-quality facilities from experienced coaches. As one of the few specialty soccer camps set in a traditional camp environment, BSA encourages athletes to train hard on the field and to then enjoy a relaxing elective activity, like swimming in our private lake, yoga, hiking or arts & crafts; as well as to enjoy down-time with friends.

Athletes live in newly-renovated cabins that they share with cabin counselors who are specifically selected and trained to supervision and promote friendships among athletes.

Heather O’Reilly joined the U.S. women’s national soccer team in 2002 when she was 17. She holds the U.S. national team record for consecutive games played, with 74. A three-time Olympic gold medalist (2004, 2008 and 2012), she has played in more than 150 international contests. O'Reilly graduated from the University of North Carolina with a degree in education. She was a forward for the North Carolina women's soccer program from 2003 through 2006, winning national championships in 2003 and 2006; and was awarded the NCAA's Today’s Top VIII Award following her senior year. She currently plays for the Boston Breakers of the NWSL.