Jocelyn Woods, 27, born with a severe neuromuscular disease, launches modeling campaign "Ecstasy of a Cripple Part II: WE ARE THE CURE" with photographer/artist Thomas Dodd, modeling in a series of erotica to summon global awareness. 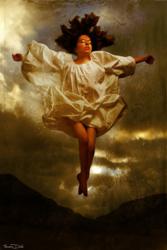 "We are told that neuromuscular disease is a progressive wasting disease that will eventually kill us from respiratory failure," says Woods, "But 'Jerry's kids' are growing up, and the dismal predictions used to gain millions of dollars have proven gloriously false. Rather than prostitute myself for the agenda of medical research fundraisers that promise vague future cures while vastly ignoring the needs of those currently living with NMD, I have inaugurated a campaign to recognize and encourage our ingenious ability to pioneer our own cures; cures that unleash full presence and participation in our miraculous physicality. And the biggest cure of all is authentic expression."

Jocelyn and Thomas began their convergence in 2012, releasing Part I of Ecstasy of a Cripple: the Resurrection of Passion, a series of images geared towards shattering limiting paradigms surrounding disability, sexuality and immortality. "This looks as if it should belong in the Sistine Chapel," says artist Kim Waldrop Evans of "A Dance of Veils", not displayed here due to mainstream media's prohibition against nudity. Part II: WE ARE THE CURE shall reunite the team this summer of 2013, this time to include dramaturgical performances by Woods of her mystic poetry in Dodd's first experimental short films.

"It ratchets sex up into the divine realm while anchoring it in a body that baffles expectation," remarks psychotherapist and Tantric facilitator Fiona Daly. "First it challenged my notion around physicality, that some how the perfect body would support the best sexual experience, and then I am astounded to read of ecstatic states, that took many years of Tantric practice for me to touch." Noting that "There is so much stuff out there about sacred sex," Daly feels Woods' project is "Wild and challenging...exquisite and really unique. In this time when sexuality is so tied to an ever narrowing look of a body, Woods explodes that by presenting the perfection of the physical vessel in which she experiences divinity."

Contributors to the campaign on http://igg.me/at/WeAreTheCure will receive limited edition canvas prints, t-shirts and behind-the-scenes footage; for higher level contributions Woods is offering personal consultations and daring improvisational performances, calling her audience her "co-creators in summoning the muse."

"Jocelyn Woods is a mystical erotic visionary," exclaims sacred sex blogger Kama Keshish. "Once you have glimpsed her rapturous art and divine poetry, you will be changed forever!" Woods' poetry is written semi-automatically in non-drug-induced altered states of consciousness. "Rather than pander to this trend of marketing suffering," says the young muse, "I wish to share ecstasy. Rather than separate the person from the physicality, I want to show how the body can be an integral vessel of wholeness. That is the real inspiration. It is not about re-wiring perception, it is about throwing the compass of reference points out the window. Concepts of mortality, solidity and the human condition have no ground in states of rapture."

While her experiences of ecstatic union with the divine have been compared to Saint Teresa of Avila, Jocelyn says that "Unhindered by the heavy chains of belief systems which deny and condemn the body as a corrupt condition of sin allows one to enter a rapture beyond the iconic saintly portrayals eulogized in history. To realize the body and soul are but inseparable components, facilitates the alchemical recipe of resurrected immortal flesh. Resurrection is not the product of conditions, but the removal of belief that imposes the conditions of decay and strife, rendering us re-membered of our natural state. It is a passionate love affair, both intensely ferocious--untamed, even feral--and the silence of a peace that passeth understanding, which characterizes incorruptible matter."

Jocelyn's proposition of immortality may seem preposterously outlandish, a hysterical fancy of offset wits, yet it is this very "mad lucidity" that Jocelyn says facilitates the breakthrough from linear mind to effortless genius. Deeply inspired by the leading mystic of the world, Almine, whom Jocelyn describes as "a teacher whom is not the Other, but speaks as though from within my infinite self in a way that I cannot help but overwhelmingly recognize as the Voice of the Mother," she studies the esoteric science and metaphysics of immortality, and along with her fellow students, is a living example of the miracles thereof.

Yet it is not in anecdotal reports or research alone that Jocelyn bases her firey summoning to her brothers and sisters, but from actual experiences facilitated--ironically enough--by exploration of her neuromuscular disease. In a recent interview with David Bollt, CEO of ModelSociety.com, she says: "Upon convalescence from repeated respiratory infections that can be fatal for people with NMD, I found that the body is most malleable when it is healing. Furthermore, in releasing identification with either the soul or body as disintegrate and tyrannical isolated segments (inaccurate bifurcation causing distortion and externalization), it is remembered as an incorruptible, fluidly renewing field, contrary to the belief that matter is immutable solidity."

"It was the sensation of this fluidity that inspired me to begin using the body as an artistic medium in itself. When I model, I feel the body shape-shifting to express the emotive attitude or state of consciousness. The body is an absolutely limitless, living work of art that embodies the disrobed self-recognition of divine perfection."

David Bollt, founder of ModelSociety.com says, "By fearlessly sharing a loving message of universal human beauty, Jocelyn is helping create a world where differences in our circumstance, and physical form become far less important than the light we bring into the world. She truly embodies her message, speaking and relating to others in such a way that a sense of divinity dwelling at the heart of our shared humanity is almost impossible to ignore."

With the charisma of an orator, Woods' Indiegogo speech summons contributors to challenge the notion of freedom. "No longer do our lives have to be dictated by the trends statistics and prescriptions of a systemized matrix when the power is with the people," Jocelyn proclaims. "The power is with the people. This statement has long been interpreted politically, as people's right to advocate, lobby, protest and fight for their rights. But what true birthright has to be advocated for, fought for in blood and tears, if it is already ours? You cannot liberate somebody who is already free. It is the deflection of focus from a paradigm valuing external dependence and profitable victimhood that convinces us, by our own acquiescence, that we lack what we already have. It is an error of vision to perceive anything as unwhole when the power of authentic expression is our natural and exulted state."

Some may call this a revolution, but Woods claims to behold a revelation, likening her project to an apokolypsis ad infinitum: "It is in the revealing of our authenticity that we find ceaseless passion, wonderment, zest and enthusiasm for a life that becomes a Living Work of Art."

A cure for disease? A New Jerusalem? Big claims for someone who cannot stand or walk and uses partial mechanical ventilation to keep her airways open during rest periods. "I do not call for a demonstration," she explains. "For decades we have resorted to activism, to the blood sweat and tears of protests, marches, sit-ins, rallies and conventions to procure often slow and laborious results that fall millions of light-years short of the need at hand. It is at a point where we must ask ourselves, my brothers and sisters, Do we wish to continue to burn down the walls, or do we wish to rise altogether above them? For all too often, the mechanistics of a programmed society will rebuild the wall again and again with relentless robotic perseverance just moments after you have given half your blood or even your life to burn it down. Movements spawn counter-movements which cause counter rebellions in a chain of ceaseless pillaging. Who would we rather be: the robots mechanistically rebuilding the walls or the eagle with vision who flies above them?For the covert operations that surround us, are but the shadows we cast by our own selves every time we believe in the program of lack."

Woods beckons for a change in perception: "If we choose to be the eagle with vision, who can fly above the thickest and highest walls or barriers ever known to mankind, then sooner or later we shall soar, and in the vision restored by our soaring we will realize that the walls have never truly existed. Americans have long said 'I have a dream,' only to continue in the slumber, that becomes a garish nightmare of hostility that pits brother against brother. A dream will remain unbalanced on one side of the equation until the eagle vision goes hand in hand with it. We must see the change we wish to see in the world, because an obscured sight is what makes us think it's not there. By what we see, we create our world. To see beneath the appearances and behold the pristine core of innocence and empowerment is to sweep back the curtains to the temple of that stands here, here in the core of your being."

A temple that she plans to unveil in July, if the funding is reached on http://igg.me/at/WeAreTheCure
Thomas Dodd is an Atlanta-based photographer/artist. Dodd’s digitally manipulated artwork resembles paintings and contains a cohesiveness and attention to texture not usually found in digital art. His images never look assembled or computer-generated and he shuns the “cut and paste“ clichés, preferring instead to assemble his scenery, costumes and models at the time of photography. Dodd’s primary subjects are mythology and their relations to emotions and psychological states. http://www.ThomasDodd.com

Woods' global audience follows her fanpage at http://www.facebook.com/Resurrection of Passion Argentine poet Bruno Cruz ardently calls Jocelyn "One of the few if not only person who can actually touch upon the skies and make us all realize that Heaven and Tartarus lies arm in arm within our selves."

"Rapture" © 2013 Thomas Dodd"Jocelyn truly embodies her message, speaking and relating to others in such a way that a sense of divinity dwelling at the heart of our shared humanity is almost impossible to ignore." --David Bollt, founder and CEO of ModelSociety.com

Detail of "Ecstasy of a Cripple" © 2013 Thomas Dodd"Something else beyond language..." --Darrell Price, art admirer