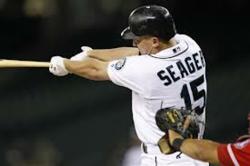 On June 5, 2013, the Chicago White Sox beat the Mariners 7-5 in one of the craziest games in history. The game started with thirteen scoreless innings, then Chicago finally broke through in the top of the fifteenth with a five run rally. To protect their lead, the Sox turned to Addison Reed, their last available reliever. Unfortunately, the Mariners scored a run on four straight singles before Jason Bay struck out. This left third baseman Kyle Seager to bat with the bases loaded and two outs in the bottom of the 15th inning. As it was up to him to keep the Mariners alive, Seager hit a grand slam. This crazy game featured fifteen pitchers between the two teams, who pitched a combined 493 pitches. It lasted 5 hours and 42 minutes, and made Seattle the first team in MLB history to score five runs in the 14th inning or later to tie a game. Hitters in the game went for a combined 33 out of 119, and both catchers caught for all sixteen innings. This extra innings thriller reminds us why we love baseball and why as a game, it is so hard to figure out. To take part in talking about this remarkable, historical game, or to buy a ticket to any other White Sox game, go to http://www.WhiteSox-Tickets.net. Here you can also Here you can also find the team schedule, news and updates, and a social media fan hub for you to stay connected. http://ftw.usatoday.com/2013/06/white-sox-beat-mariners-in-craziest-game-of-the-season/