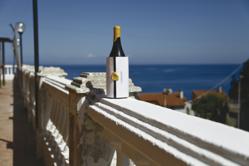 The project ‘Frescobaldi per Gorgona’ enhances administration resources by investing in inmates. This is a great example of a prison that gives inmates a real opportunity to change their lives.

Marchesi de’ Frescobaldi, one of Italy’s most prestigious wine producers with a 700 year-old history in winemaking, releases the first vintage of Gorgona, a wine made through the “Frescobaldi per Gorgona” project that provides inmates the opportunity to learn winemaking techniques and job skills under the supervision of the company’s agronomists and winemakers, led by Vice President Lamberto Frescobaldi himself.

Fifty inmates contributed to the production of Gorgona, a white wine made from Vermentino and Ansonica grapes planted on the island of Gorgona in the Tyrrhenian Sea, close to the Tuscan coast. The Frescobaldi family purchased a hectare of old vineyards and will expand with more vineyards in the upcoming months. Total production is only 2,700 bottles, but 1,000 of the bottles will reach the US market through Frescobaldi importer Folio Fine Wine Partners, in the Fall. The project was welcomed by Anna Maria Cancellieri, the Italian Minister for Justice, who said this innovative socially conscious program could be replicated at other prisons. The rate of repeat offenders is 80% for prisoners who do not find work. Frescobaldi has also committed to hire some of the workers once they've paid their debt to society.

“I am personally committed to this project and proud of the work done by the population of Gorgona as well as my team,” said Lamberto Frescobaldi. “The project was only possible with the invaluable support of Maria Grazia Giampiccolo [the prison director] and my three special partners who offered their expertise in addition to the indispensable tools for the vineyards.”

The Enoteca Pinchiorri, the world-renowned three star Michelin restaurant in Florence, is a partner promoting the gastronomic heritage of Gorgona with a dish inspired by the characteristic colors and flavors of the island, which will be featured on the restaurant’s menu this summer. Argotractors, one of the leading manufacturers of agricultural vehicles in the world, lent an orchard tractor for the activities to be carried out in the vineyard, while Simonetta Doni of Doni & Associates Studio, which specializes in designing wine labels, donated creative services for the bottle graphics.

Born in August 2012, the Gorgona initiative was financed by the Department of Penitentiary Administration and accomplished through the collaboration of the Gorgona Penitentiary's Directorate and Marchesi de’ Frescobaldi. “Work is the most effective way to reduce the rate of repeat offenders when the job is real and inmates can get some professional experience they will use after serving their time in prison,” says John Drummer, Head of the Department of Penitentiary Administration, explaining the importance of making the prisoners do a ‘real’ job. “The project ‘Frescobaldi per Gorgona’ enhances administration resources by investing in inmates. This is a great example of a prison that gives inmates a real opportunity to change their lives.”

“Gorgona is a successful example of good penitentiary management. Inmates get job training, working and living in contact with nature,” explains Maria Grazia Giampiccolo, the prison director. “The capacity is 136 and there are currently about 50 inmates. For many of them it is still possible to imagine a future because they know they have the chance to reintegrate into their respective communities with job skills they can actually use. For this reason it's critical to get real job training and the collaboration with Marchesi de' Frescobaldi provides just that.”

About Marchesi de Frescobaldi – http://www.frescobaldi.it
Marchesi de' Frescobaldi, the leading wine producer of Tuscany and one of the most historic and respected wine companies in the world, combines centuries of tradition with progressive winemaking techniques and practices. Founded in the 14th century and a supplier of wines to the royal courts of Europe for generations, Marchesi de' Frescobaldi is still a family-owned company today. Comprised of nine distinct estates totaling approximately 1,100 hectares, Marchesi de' Frescobaldi produces wines utilizing only the grapes grown in its own vineyards. The company continually upgrades and modernizes its grape growing and winemaking operations, maintaining a relentless focus on producing unique wines that express the individuality of each unique terroir from which they are produced.