A new study from the Journal of the American Medical Association shows that “even 20 years following stroke in adults aged 18 through 50 years, patients remain at a significantly higher risk of death compared with the general population.” (1) polyDNA recommends targeting latent viruses, a possible underlying cause of stroke, with Muxscle. 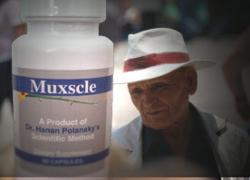 Most people (including a lot of doctors) think of a stroke as something that happens to old people. But the rate is increasing among those in their 50s, 40s and even younger. - NPR

“Most people (including a lot of doctors) think of a stroke as something that happens to old people. But the rate is increasing among those in their 50s, 40s and even younger.” (NPR, April 01, 2013) (2) Moreover, “research finds that one out of 12 people who have a stroke will likely soon have another stroke, and one out of four will likely die within one year.” (ScienceDaily.com, 2010) (3)

In other words, whether one is young or old, the risk of stroke is increasing. Even worse, those who experience a first stroke are at high risk of having another, fatal stroke soon afterwards.

Why does modern medicine fail to reduce the risk of a second stroke? Or, to paraphrase the title of the ScienceDaily.com article, “Why does Secondary Stroke Prevention Need Improvement?” After all, when one suffers a stroke the individual usually follows the instructions of the doctor to the letter. The patient tries to change his lifestyle and completely accommodate the doctor’s instructions. Yet the risk of a second stroke remains high. Why?

“After surviving the first 30 days after young ischemic stroke, the cumulative mortality was increased…This mortality remained at this higher level even in the second and third decade after young stroke….the underlying disease causing the stroke at a young age continues to be active throughout life.” (1)

Recently, scientists discovered the role of viruses in stroke. Several studies have shown that "chronic and/or past infections rather than any one single infectious disease is associated with the risk of stroke." (Grau 2010) (4)

Most doctors today do not address the possibility that a latent virus was the cause of the first stroke. By ignoring this possibility, they do not address the underlying cause of stroke, and therefore the risk of a second stroke remains high. Until doctors start talking with their patients about the association between their viral infections and stroke, it is unlikely that medicine will see an improvement in secondary stroke prevention.

Is there a way to eliminate the viral infection that may cause a stroke? polyDNA recommends Muxscle, an antiviral natural product, clinically proven by scientists at the Center for the Biology of Chronic Disease (CBCD) to be effective against latent viruses. (5)

Each capsule of Muxscle contains a patented formula of five all natural ingredients including selenium, camellia sinesis extract, quercetin, cinnamomum extract, and licorice extract. In addition, each bottle is GMP Certified. (6).