To celebrate the X, Lumedyne is sponsoring the Summer Fun photo contest with PhotoScramble and MorePhotos. Enter your fun summer photo to win the new Lumedyne X battery pack for twice as many flashes twice as quickly. 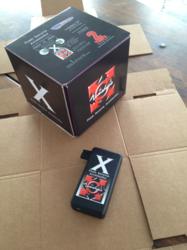 Quicker flashes from the X

I need to keep my gear light and my shoots uninterrupted and moving quickly. Lumedyne's "X" speedlight battery packs are just what the doctor ordered! They're the smallest, lightest weight auxiliary power packs available.
-Michael Corsentino

Lumedyne is introducing the world's smallest high voltage pack for on-camera flashes, about the size of a deck of cards. It's called the "X" (short for eXtreme). The Camera Flash Recycle Accelerator is designed to be plugged directly into Nikon™ or Canon™ style flashes, as well as other popular flash brands like Nissin™. For many years, Lumedyne and other brands have been producing high voltage packs that use a cable to plug into the HV power jack on many of the top model on-camera flashes. It’s the first and only HV Pack that is so small that it can be plugged directly into the flash without a dangling cable. The X uses a Lithium Ion battery similar to a cell phone and the world's smallest and most efficient high voltage recycle circuit to provide an amazing performance enhancement for its tiny size and weight.

Lumedyne is giving away 2 Xs with their photo contest. Enter photos now through July 31st for a chance to win over $800 in Cash and Prizes.

Top 12 images will be narrowed down by popular vote, at which time our panel of judges will pick the top three images based on their expertise.

When the on-camera flash has fully charged AA Batteries, the Lumedyne X will help it recycle nearly twice as fast. However, as the AA batteries wear down, the Lumedyne X takes over the bulk of the recycling effort and cuts the recycling time down to less than a third of the time the AA's would take by themselves, or three times faster. Because the X is helping with the recycling power, the AA batteries tend to perform about twice as long as well, thus doubling the flashes per charge before needing to recharge or replace the AA's.

Because the X is providing the flash with direct high voltage for the internal capacitors, the recycling work for the internal AA's is drastically reduced. This lowers the heat generated and helps the AA's perform to their maximum potential regardless of what style AA's are selected. For the technical geeks, the AA batteries still do all of the six volt operations like moving the power reflector and all of the computer/display and indicator lights; and the AA's still help the recycling so higher charged batteries will still perform better overall. As an added bonus, the tight tolerances of the X will actually keep the flash performing more consistently between sequential flashes and throughout the entire shoot.

There are many flashes which have a compatible HV connection on the flash including top models from Canon™ and Nissin™ for Canon™ cameras which will all use the VXCA. The flashes with an HV jack on them from Nikon™ and the Nissin™ flashes for Nikon™ will all use the VXNA. Customers who use other brands of flashes with other styles of HV jacks should contact Lumedyne to determine compatibility for that brand of flash.

Lumedyne, Inc. is a family owned and operated, American success story. They have provided the highest quality portable flash systems in the world for over 40 years. No other brand of portable flash offers as much versatility or will even claim to perform to their guaranteed standards. These units are basically hand built in our 7,000 square foot factory and shipped to Authorized Dealers around the world.

The X installed on Nikon Flash