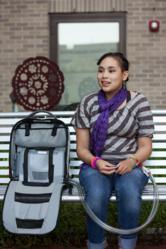 On May 21, 20-year-old Tiernee Gonzalez became the first SynCardia Total Artificial Heart patient to be discharged from Cincinnati Children’s to wait for a matching donor heart at home using the Freedom® portable driver.

“The SynCardia temporary Total Artificial Heart has opened the floodgates in respect to the treatment possibilities for a quickly growing population of children in heart failure, including adolescents suffering from chronic rejection of their transplanted heart, end-stage heart failure accompanied by multiple congenital defects and a late-stage failing Fontan circulation,” said Dr. David L.S. Morales, chief of pediatric cardiothoracic surgery at Cincinnati Children’s Hospital Medical Center, which ranked in the top five.

In addition to the seven hospitals listed above, #9 Lucile Packard Children’s Hospital at Stanford and #43 Arkansas Children’s Hospital have completed the first two phases of SynCardia’s four-phase certification program and are ready to perform their first proctored implant once an appropriate patient has been identified.

Clinical research, surgical survival and ability to prevent bloodstream infections were among the factors making up 75% of the score used for the rankings. The other 25% reflects how many of 450 pediatric cardiologists and heart surgeons surveyed in 2011, 2012 and 2013 recommended the hospital.

SynCardia Systems, Inc. (Tucson, AZ) is the privately held manufacturer of the world's first and only FDA, Health Canada and CE approved Total Artificial Heart. Originally used as a permanent replacement heart, the SynCardia Total Artificial Heart is currently approved as a bridge to transplant for people suffering from end-stage heart failure affecting both sides of the heart (biventricular failure). There have been more than 1,100 implants of the Total Artificial Heart, accounting for more than 300 patient years of life.