Sochi 2014 Unveils the Celebration Cauldron of the Olympic Torch Relay

The Sochi 2014 Organizing Committee unveiled the Celebration Cauldron of the Olympic Torch Relay, the longest Torch Relay in the history of the Olympic Winter Games, which is presented by Coca-Cola, OSAO "Ingosstrakh", and OAO "Russian Railways Company". 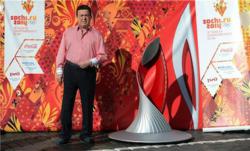 Sochi 2014 Unveils the Celebration Cauldron of the Olympic Torch Relay

Each region will have an opportunity to keep the Cauldron. The Cauldron will form a part of Games Legacy and will remind the people of each region of this historic event – the longest Torch Relay in the history of the Olympic Winter Games

The Sochi 2014 Organizing Committee unveiled the Celebration Cauldron of the Olympic Torch Relay, the longest Torch Relay in the history of the Olympic Winter Games, which is presented by Coca-Cola, OSAO "Ingosstrakh", and OAO "Russian Railways Company".

The lighting of the Celebration Cauldron will be the culmination of each day’s festivities across Russia during the Relay. The Celebration Cauldrons are set to be produced and will be installed in all of the cities hosting end of day celebrations along the route of the Sochi 2014 Olympic Torch Relay.

The concept behind the Cauldron echoes that of the Olympic Torch, and was designed in an identical style. The color of the Cauldron is bright red and silver: cold 'ice' sparkles in the sunlight and is topped off with a warm, dark scarlet 'flame'.

The Celebration Cauldron for Sochi 2014 was developed by a team of famous Russian designers and engineers. The details of the cauldron are covered in ultra-glossy dyes featuring deep red color. The basic color is light-silver "chrome", and the finish - low-dispersion matte.

Each cauldron is 130 cm tall, 60 cm wide and the base is 110 cm wide. The cauldron and its component parts have been put through numerous tests, and have been tested in the harshest of conditions.

The President of the Sochi 2014 Organizing Committee, Dmitry Chernyshenko, said:

The Celebration Cauldron of the Olympic Torch was unveiled as part of the festivities in Red Square marking the national holiday of the Russian Federation - “Russia Day”.

The Olympic Torch Relay will begin its journey from Moscow on October 7, 2013. Based on the organizers' estimates, 90% of the Russian population will find themselves within an hour's drive of the route of the Relay, and thus around 130 million residents of this country will be able to play a direct part in the Relay or witness it at first hand. It will cover a total of over 65,000 kilometers, by car, train, plane and even on a Russian troika pulled by reindeer.

The Presenting Partners of the Olympic Torch Relay are the companies Coca-Cola, OSAO "Ingosstrakh", and OAO "Russian Railways Company".

The Presenting Partners of the Sochi 2014 Olympic Torch Relay

The Coca-Cola Company is the largest producer in the world of non-alcoholic drinks, offering consumers over 500 carbonated and non-carbonated beverages. Along with the Coca-Cola brand, which is recognized as the most valuable in the world, the company's portfolio includes 15 brands, the value of which amounts to over one billion dollars.

Thanks to the largest distribution system in the world, consumers in more than 200 countries around the world enjoy Coca-Cola beverages. Every day, over 1.8 billion portions of the company's beverages are sold internationally.

Coca-Cola in Russia – Coca-Cola is one of the biggest investors in the Russian economy. Coca-Cola's level of investment in Russia currently exceeds 3 billion dollars. Beverages with Coca-Cola registered trade marks are produced at 16 modern plants located on Russian territory from Saint Petersburg to Vladivostok (including plants of companies "Multon" and "Nidan").

Coca-Cola Russia, which is an amalgamation of the company Coca-Cola and its partner-bottling company Hellenic, provides employment for over 15,000 highly qualified staff.

Over the course of over 100 years, the participation of the Coca-Cola Company in sports events across the world has been and continues to be an integral part of the Company's policy and an important element of the business.

The Coca-Cola Company has proven to be an irreplaceable partner of the International Olympic Committee since 1928.

For more detailed information about the company's activities, please visit the following websites: http://www.thecocacolacompany.com and http://www.cocacolarussia.ru

Ingosstrakh Insurance Company has operated in the domestic market since 1947. In 65 years, "Ingosstrakh" has transformed from a small branch to a large company, a universal insurer at federal level, and is the leader in various types of insurance. Today, branches are located across the country, and there are offices in 310 towns and cities across Russia. Today, the insurance company's clients include over 12 million individuals and more than 400,000 commercial and state companies. Ingosstrakh’s high business reputation is confirmed by Standard & Poor's international rating agency and Russian agency "Expert RA".

The history of interaction between "Ingosstrakh" and the sports movement spans more than three decades. For "Ingosstrakh", the Olympic Winter Games of 2014 in the city of Sochi are going to be the second Olympic Games that the company has supported in our country. 32 years ago, "Ingosstrakh" was the supplier of insurance for the 1980 Olympics in Moscow, providing insurance cover both during the preparations for the Games and during the competitions themselves. "Ingosstrakh" played an active role in insuring the Olympic venues which were put up for the 1980 Olympics. At that time, the Olympic flame was also protected by "Ingosstrakh": the company insured the athletes' torch relay. The policy was active throughout the entire Olympic Torch Relay.

More than 30 years since the 1980 Olympics, "Ingosstrakh" has again received this great honor. Since October 2010, it has been a Partner: the official insurer of the 2014 Olympic Games in Sochi. Thus, for the second time in its 65-year history, the insurer is supporting one of the most important events in the world of sport: the first Olympic Games in the history of modern Russia, the mission of which is to unite the country, and demonstrate the beauty and diversity of Russia to the world.

OAO "Russian Railways Company" is one of the biggest transport companies in Russia, with a network consisting of over 85,000 km of railway lines. Every year the company provides transit for a billion passengers and over 1.2 million tons of freight.

In February 2010, OAO "Russian Railways Company" became a General Partner of the Olympic and Paralympic Games of 2014.

The company is implementing a range of important projects related to the construction new railways and stations in the region where the 2014 Games are going to be held, all of which are designed to ensure railway transit of construction material and equipment during the preparations for the Olympics, and to take competitors and spectators to the competition venues.

All the projects being carried out by OAO "Russian Railways Company" are taking place at unique construction sites, and serve as examples of complex task-solution: they are being created taking account of "barrier-free environment" requirements, so that they can be used by people with disabilities, with the very latest technology and "green building" standards applied.

The infrastructure elements on which OAO "Russian Railways Company" is working will form the main component of the legacy left by the Sochi 2014 Games. The new railway lines and stations will significantly improve passenger comfort on rail journeys, and the volume of passenger and freight transportation by rail will increase.