Everest Academy http://www.everestadvantage.org in Lemont, IL held a ceremonious event that celebrated volunteers, student achievement and awards, and culminated in the graduation exercises of the Class of 2013. Graduate James Beecher of Lemont is honored with the esteemed student award of the year. 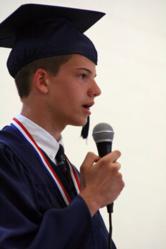 "It is one thing to hear about Integral Formation, Everest's unique approach to education, & read about it on the website, it is quite another to live it & see it being taught to your child....then it resonates!" said parent Catrina Wroblewski.

On June 5th Everest Academy in Lemont, IL held a ceremonious event that celebrated volunteers, student achievement and awards, and culminated in the graduation exercises of the Class of 2013.

The joyous day started off with the acknowledgement that Everest Academy would not be what it is without the generous and dedicated support of parent volunteers. All of those who gave of themselves over the past school year in service to Everest were recognized and appreciated for their time, efforts and hard work.

The student awards ceremony for various areas of academic achievement and personal growth marked the culmination of the year’s efforts, learning, and accomplishments. An integrated approach to education as well and personalized attention allow the students to be known and supported as they develop into who it is God intends them to be and to become future leaders of our society. As a result, the achievements recognized and the awards distributed were plentiful and specific.

Recognized were the areas of leadership, athletic ability and outstanding sportsmanship, academic excellence and exemplary conduct, and perfect attendance. Also noted were effort and perseverance, exceptional charity and friendship, and unfailing apostolic service to the community. A student in each grade received the Principal’s Award of Academic Excellence, which is given for the highest overall grade point average for all subjects. The Semper Altius award is also granted to a student in each grade who lives the motto of Everest - “Always Higher” - through demonstrated diligence, strength of mind and character.

Standing out among the honors presented was the highly esteemed Integer Award. The Integer Award is given each year to an 8th grade student who exemplifies exceptional character, integrity, and leadership skills, and assimilates the highest ideals of all areas of formation addressed by an Everest education - academic, character, spiritual and service. The recipient of this honor this year was James Beecher of Lemont. James accepted the distinguished award accompanied by his parents, Lisa and Jim Beecher, and responded with a delightful and perceptive speech that demonstrated his intelligence, wit and humor. Mrs. Elaine Fleck who taught James in 3rd grade, commented, “James is one of the hardest workers I have ever had. He strives for perfection. He is serious, determined and Christ-centered. He does what is right and knows how to have a good time along the way!”

The graduation ceremony of the 8th grade class concluded the day’s events with the Everest Academy principal, Ms. Gamache, noting that the Class of 2013 was indeed a very special class that was small in number but enormous in heart, faith, and intellect. Ms. Gamache addressed the graduates stating, “(Everest graduates) you have been provided the gift of a beautiful education, a solid foundation. You have exercised excellence, excelled in what you love, you desire to learn, have grown in confidence, developed a sound intelligence and cultivated a compassionate heart. We have confidence that you will show the world what we say takes place here at Everest Academy, educating well-rounded leaders of character and integrity happens here and makes a difference.”

James Beecher who will attend Benet Academy in Lisle, IL in the fall stated, “Everest has helped me to be academically and spiritually strong.” And Brian Trochuck of Homer Glen who is off to Providence Catholic High School appreciated getting to really know everyone while at Everest. Catrina Wroblewski, mother of graduate, Brian Wroblewski, commented, “It is one thing to hear about Integral Formation, Everest’s unique approach to education, and read about it on the website, it is quite another to live it and see it being taught to your child…. Then it resonates!”

The Everest community ended their celebratory event with a reception hosted by the 7th grade parents.

Everest Academy is an independent Roman Catholic school in Lemont educating children from preschool through eighth grade. The teachers and staff are dedicated to forming the whole child by providing the highest level of academics, by building strong character, and by preparing generous leaders ready to serve the community. If you would like to learn more about Everest Academy's unique approach to education, please contact Coleen Mast at 630-243-1995 or visit http://www.everestadvantage.org.

Graduate James Beecher is honored with his parents for exceptional formation in the areas of academics, character, spiritual & service.

Everest Academy sends off it's graduates of 2013

The Everest Academy class of 2013

Graduate Joseph Colarelli of Lockport with his proud family