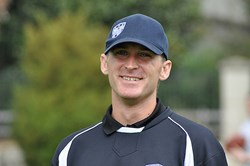 Our mothers, our sisters and our daughters are at risk for ovarian cancer and we need to do what we can to improve treatment options and find ways for early detection. Dan Zeidman.

"We are excited to have Dan jump on board,” says Cundiff. “He lives out his life as an example for young specialists; great example, great purpose. That is exactly what we are striving for with Kicking For The Dream."

Zeidman says Kicking For The Dream is definitely a project worth supporting.

"This is a wonderful opportunity for the kicking world to support such a worthy cause,” says Zeidman. “Our mothers, our sisters and our daughters are at risk for ovarian cancer and we need to do what we can to improve treatment options and find ways for early detection.”

“I own and operate Lifetime Kicking Academy,” Zeidman says. “And I am a proud supporter of Kicking For The Dream. We train day in and day out to become the best kickers we can be and eventually, live the dream to kick in college and the pros. Well, Colleen's Dream supersedes any dream we can accomplish in the football world."

Go here for Dan Zeidman’s Kicking For The Dream page.

In 2008, Coach Z signed a free agent contract for the Carolina Panthers. He spent that summer competing for the punting and kickoff specialist jobs.

Zeidman is among a number of NCS Associates to announce his support for the Kicking For The Dream project. Last month, NCS Founder Michael Husted was the first to support Cundiff’s project.

The National Camp Series (NCS) is a nationwide network of expert kicking coaches with NFL and College level playing experience. According to Husted, the goal of NCS is to provide effective instruction on the field and guidance off of the field that will allow student-athletes the ability to leverage their sport to get a college education.

Go here to find out more about the National Camp Series.

Cundiff, who has been an NFL kicker for over 10 years for teams such as the Cowboys, Saints, Browns, Ravens and Redskins, launched Kicking For The Dream in May of 2013, as an effort to support Colleen’s Dream Foundation, a foundation which raises money to support research for the early detection of, and improved treatment for, ovarian cancer.

He says Colleen’s Dream Foundation started in 2012 as a result of his mother-in-laws’ battle with ovarian cancer.

“Colleen felt it was important to raise money for research that will lead to reliable early detection testing and improved treatment for ovarian cancer,” says Cundiff. “Because so little is known about ovarian cancer in proportion to other women’s health issues, we have an incredible opportunity for research and education.”

Cundiff says he appreciates having Zeidman’s support in this effort, and looks forward to working with all the NCS Associates who are willing to support the Kicking For The Dream project.

“I talked to a number of NCS Associates at this year’s NCS Super Camp and there was a great deal of interest in participating in Kicking For The Dream,” says Cundiff. “I will continue to reach out to all the NCS Associates over the next few months to enlist their help as well.”

Go here for more information about Kicking For The Dream.

Kicking For The Dream Logo