Located in the rolling hills of Southern California’s wine country, the Temecula Creek Inn is host to a wedding where Peekaboo Photo Booth was in attendance capturing memories with a photo booth. 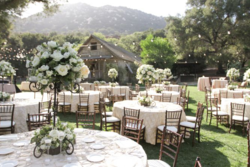 What an ideal place to get married… at least from my point of view.

Much of the fun took place in a 5x5 white cabana photo booth rental equipped with outrageous props including hats, boas, glasses, masks and other miscellaneous items. The booth was provided by Orlando-based company, Peekaboo Photo Booth.

Andrew Birr, owner of Peekaboo Photo Booth states, “I’m a lover of wine and I got a chance to tour through the wine country down in Southern Cali when I started this company about 6 years ago. I know Napa Valley, Sonoma Valley, and the others up north are the ones people most think of as far as wine country, but Temecula is definitely formidable in beauty and some excellent wine. What an ideal place to get married…at least from my point of view.”