Diane S. Hinson, Esq., Founder of Creative Family Connections LLC, a surrogacy matching and legal services law firm, served as lead witness before the Council of the District of Columbia in support of legislation to legalize surrogacy in the District. 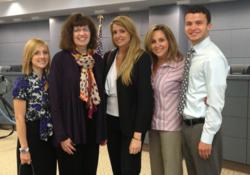 This bill seeks to repeal the provisions of the existing Code that make surrogacy criminal in the District of Columbia. It would permit surrogacy-parenting contracts in the District, and ensure all residents equal access to family building options.

Initially introduced by D.C. Councilmember David Catania, Bill 20-32 seeks to repeal the provisions of the District’s existing Code that make surrogacy criminal. At present, the legislation would permit gestational surrogacy contracts within the District and establish safeguards to ensure that all parties to such contracts, and the child that will result, are protected.

Leading off the witnesses testifying on behalf of the legislation, Diane S.Hinson, Esq., Founder and Managing Attorney for Creative Family Connections LLC, the largest surrogacy matching and legal services law firm in the metropolitan Washington, D.C. area, explained the existing law’s impact on intended parents who reside within the District, and its implications for denying equal rights for all of its residents.

As referenced by Hinson, Creative Family Connections’ map is a state-by-state comparison of surrogacy laws and is the only such resource of its kind on how surrogacy laws are actually practiced in each of the 50 States and the District of Columbia.

“When we explain to prospective parents who live in the District why we cannot match them to a surrogate in the District, their reaction is pure shock…and disappointment. After all, the District of Columbia has a track record of being a leader in this nation in providing equal rights for all its residents, including the right of same-sex couples to marry,” continued Hinson.

Hinson summarized for the committee what she and other proponents see as the solution to this inequity, Bill 20-32, which Hinson played a key role in helping to draft.

“Bill 20-32 repeals the provisions of the existing Code that make surrogacy criminal. It permits surrogacy contracts in the District, while establishing safeguards to ensure that ‘best practices’ are used, and it allows the District to move into its rightful and progressive leadership place, and into the coveted “Green Light” category on the map. In doing so, the District Council will ensure that all its residents can build families," closed Hinson.