The CNE of Ecuador Makes Their Election Modernization Vision a Reality

The National Election Council of Ecuador leads the way to innovative, secure and transparent election processes with Scytl´s e-Election Platform 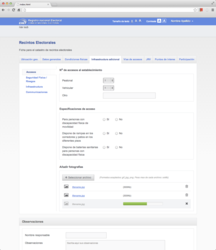 “Scytl´s technology and their team of election experts have consistently delivered beyond our expectations, the meetings in Barcelona have further strengthened our already close partnership and trust."

The meetings taking place in Barcelona between the CNE and Scytl have seen the finalizing of the roadmap implementation for the deployment of the next phases of the CNE election modernization vision. Going beyond the deployment of the first phase in February 2013, the election modernization encompasses a broad spectrum of additional pre-election, Election Day and post-election management functionality. This includes the deployment of additional modules of the Scytl e-Election Platform for candidate, poll worker and observer management, voter registration, election logistics, election promotion and spend, amongst others.

“Scytl´s technology and their team of election experts have consistently delivered far beyond our expectations and the meetings in Barcelona have further strengthened our already close partnership and trust" comments Dr. Domingo Paredes, President CNE Ecuador. “The use of technology like Scytl´s is the base for the institutionalization, transformation and modernization of the electoral process in Ecuador, the legacy that as a commission we wish to leave the country.”

The first phase of the CNE´s election modernization vision was implemented to support the National Elections in February 2013. Key to this initial deployment was not only the implementation of a more efficient and secure election administration process, but proving to both the Ecuadorian public and international observers that the electoral process was trustworthy, transparent and auditable.

“We are extremely proud to have been selected by the CNE as their trusted partner to make their election modernization vision a reality,” comments Pere Valles, CEO Scytl. “Our e-Election Platform supported the 2013 elections in a variety of ways: from providing a scalable and dependable system ensuring traceability and maximum security, to the publishing of results in a far timelier manner, together with providing the overall technology and expertise required for an election of this proportion,” he concludes.

With the rollout of Ecuador´s election modernization vision, the country and its electoral management process lead the way in the region and is a reference for other countries looking to leverage innovative, secure to support efficient, secure, transparent and auditable election processes.

About Scytl
Scytl is the global leader in secure election management and electronic voting solutions. Specializing in election modernization technologies, Scytl offers the first end-to-end election management and voting platform, providing the highest security and transparency standards currently available. Scytl has capitalized on its more than 18 years of research to develop election-specific cryptographic security technology protected by more than 40 international patents and patent applications, positioning Scytl as the company with the largest patent portfolio of the industry. Scytl’s solutions have been successfully used in more than 20 countries throughout the world over the last 10 years, including Canada, the United States, Mexico, Ecuador, France, Norway, Switzerland, Bosnia-Herzegovina, the UAE, India and Australia. Scytl is headquartered in Barcelona, Spain with strategic offices in Canada, the United States, Peru and Greece as well as field offices in the UK, Ukraine, Malaysia, India and Brazil. http://www.scytl.com

About CNE
The National Electoral Council guarantees the exercise of its citizens political rights and promotes the strengthening of democracy through organization of electoral processes and the support of social and political organizations, ensuring a fair, equal, equal, intercultural, free, democratic participation to elect and be elected. Our vision: in 2017, become the electoral institution of reference nationally and international, that continuously innovates their processes in order to consolidate representative, direct and communitarian democracy. http://www.cne.gob.ec