The Blue Machine Movie and Documentary is in Preproduction, Immortalizing One of Chicago Public Schools and the Nation's Most Respected and Winning, Coach Alvin Scott 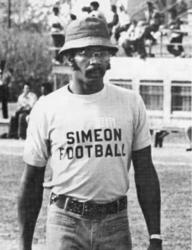 The legendary African American Coach Alvin Scott will be immortalized in a film and documentary Executive produced by Bill Smith. With a state record of 5 overtimes, 200 victories and a compiled a record of 262-130 in 33 seasons at Simeon (1972-2004) Alvin Scott is an enigma. He led his team to the city championship in 1983, 1986, 2000 and 2003. In March of 2001, he was inducted into the Illinois High School Football Coaches Association Hall of Fame. The film and documentary will highlight unseen footage of games along with behind the scene clips and in depth coaching strategies. Before his untimely passing, Alvin Scott single-handedly brought respect to The Chicago Public League Footbal conference. Certain events will be reshot and casted with professional actors and former players to highlight how he instilled hope, professionalism, integrity and educational work ethic in players from Chicago's South side neighborhoods. Many players have moved on and been drafted to the NFL that he coached while at Simeon Career Academy. Alumni under his direction have built great families, professional careers and businesses as a result of his empowerment. Coach Al Scott took his team to the IHSA Class 5A Quarter Finals in 1979 and 1990 and was the Prep Bowl runner-up in 1983, 1986, 2000 and 2003. He is missed, however he will not be forgotten.