78 percent of Americans prefer to buy American-made products. These tips will help Americans show their patriotism this Independence Day. 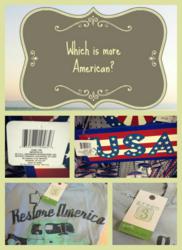 There isn’t anything intrinsically patriotic about buying American flags or flag- themed merchandise if it is not, in fact, made in the U.S.A.

In February, Consumer Reports magazine reported that 78 percent of Americans would prefer to buy American-made products, according to a nationally representative survey by Consumer Reports National Research Center. Many survey respondents said they would even pay more for the American-made goods over their Chinese-made equivalents.

A common obstacle for those who wish to buy American is actually locating American-made products, even when it comes to patriotic merchandise for Independence Day.

There isn’t anything intrinsically patriotic about buying American flags or flag- themed merchandise if it is not, in fact, made in the U.S.A. Instead of buying Chinese-made, American-themed merchandise, consumers can show patriotism by purchasing Independence Day decor from local craft fairs and markets. Locally crafted patriotic merchandise is more likely to stand the test of time, meaning, consumers can afford the higher price tag since they won’t have to replace the product as often as lower quality merchandise made overseas. This gives patriots a chance to support the American economy this 4th of July.

To buy an American flag without a "Made in China" label, consumers can purchase their stars and stripes from one of four flag companies producing flags here in the states: Annin Flagmakers, Valley Forge Flag Co., flagsource.com or Chicago Flag and Decorating Co.

Another option for supporting America this Independence Day is to pass on the flag-print imports all together, and decorate with red, white and blue American-made materials. Also, consider sporting an American-made T-shirt in lieu of an American-print one produced elsewhere.