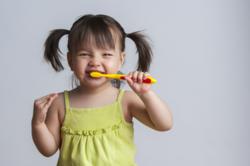 Although cavities are nearly 100 percent preventable, more than one in four American caregivers reported that their children had a cavity filled in the past year. This was among the findings of a new survey1 of nearly 1,000 caregivers released today by Delta Dental in conjunction with National Children’s Dental Health Month. Among children who had a cavity in the past year, 53 percent had two or more cavities.

The 2013 Delta Dental Children’s Oral Health Survey shows that not only are Americans unaware they can pass cavity-causing bacteria to children, but they also need to brush up on some critical children’s dental health habits, including basics such as brushing and flossing.

“Parents and caregivers need to teach good oral health habits to children at a young age to help prevent cavities,” said Dr. Bill Kohn, DDS, Delta Dental’s vice president for dental science and policy. “Baby teeth are very important. They help children chew and speak properly and hold space for permanent teeth. If a child has healthy baby teeth, chances are he or she will have healthy adult teeth.”

These are some of the oral health habits that fall short of what’s recommended by dental professionals:

About Delta Dental Plans Association
The not-for-profit Delta Dental Plans Association (http://www.deltadental.com), based in Oak Brook, Ill., is the leading national network of independent dental service corporations. It provides dental benefits programs to more than 60 million Americans in more than 97,000 employee groups throughout the country. For more oral health news and information from Dr. Kohn and DDPA, subscribe to our blog and follow us on Twitter.

1 Morpace Inc. conducted the 2013 Delta Dental Children’s Oral Health Survey. Interviews were conducted nationally via the Internet with 926 primary caregivers of children from birth to age 11. For results based on the total sample of national adults, the margin of error is ±3.2 percentage points at a 95 percent confidence level.