Energetic new single "GENESIS" brings international group of musicians and producers together -- physically, digitally and philosophically -- from points across the globe. 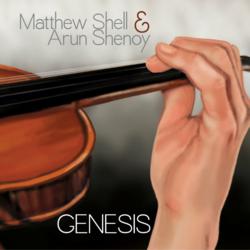 Victorious is more than just a incredibly beautiful album, it is proof of how musicians and artists from around the world can now connect to record amazing music together without the limitations of location.

Narked Records, in collaboration with MTS Music, is pleased to announce the release of “GENESIS” an exciting instrumental single forged out of the first ever collaboration between record producers Matthew Shell & Arun Shenoy.

The music on this track features guest musicians from around the world, including Ian Cameron of Canada on lead violin. “GENESIS” is the lead single for Shell's new album VICTORIOUS, releasing in Summer 2013; it can be heard at Soundcloud, and purchased at iTunes, Amazon and CDBaby.

The producers describe the piece as “a glorious celebration of the beauty of unity” adding that “it brought our musical family from across the globe together again.” Music writer El Guero Unico, at Generation Bass, echoed their sentiment writing “Victorious is more than just a incredibly beautiful album, it is proof of how musicians and artists from around the world can now connect to record amazing music together without the limitations of location.”

Shenoy is based in Singapore, and his production style weaves through the genres of rock n roll, world and jazz. His self-released world fusion debut titled "Rumbadoodle" (ASMP, 2012) featured some of the musicians heard on “GENESIS” and garnered a GRAMMY® nomination in Pop Instrumental at this year’s 55th Annual GRAMMY® Awards.

Shell, a Washington DC based music producer & engineer, was recently featured on GRAMMY.com. He has produced and/or engineered records for a wide range of acclaimed artists over the years. His upcoming album release – Victorious -- will feature collaborators from around the world, including Kenny McNeil, G.P. Jackson, Taurus Soul, Rufus Fly, Markus Huber, Vahagn Stepanyan, and Shenoy, among others.

Director Jason Baustin, of Traveste Films, combined footage from the various recording sessions in Armenia, India, Germany, and the U.S. to create a music video that drives home the global nature of the collaboration and the powerful part played by technology. The single's cover art direction was provided by Robert Capria (Actuality Films) and Roshni Mohapatra, both of whom also art directed Rumbadoodle.

About MTS Music:
MTS Music is a new record label established in 2013 by Matthew Shell. The label is focused on creating an eclectic mix of high quality music that displays a passion for excellence and unparalleled musicianship.

About Narked Records:
Narked Records is a new record label established in 2013 by Arun Shenoy. The label is focused on high quality music services and releases worldwide. Narked Records discovers and develops recording artists, with promotion and distribution across traditional and online media, offering musical experiences in live and radio formats.