Register Now To Scale The Strat On March 2, 2013, Benefiting The American Lung Association in Nevada 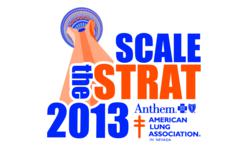 “Imagine having to struggle for air every day,” said American Lung Association in Nevada Executive Director Allison Newlon Moser. “That’s reality for more than 35 million people who live with lung disease in the United States.

Participants will scale all 108 floors and 1,455 steps inside The Stratosphere Tower, the highest building west of the Mississippi River, to raise money for the American Lung Association in Nevada’s mission of preventing lung diseases and promoting lung health.

In 2012, an unprecedented 400 people participated in this extreme climbing event and raised a record $130,000 for the American Lung Association in Nevada.

For the fifth annual Scale the Strat, the competition will be streamlined into one day of climbing. A staggered shotgun start will allow each participant to scale the Tower once. Awards will be presented at the end of the day for fastest times and largest fundraising efforts in various categories.

“Athletes of all abilities come for the rare opportunity to climb our Stratosphere Tower,” said Stratosphere Casino, Hotel & Tower General Manager Paul Hobson. “Our team at the Stratosphere values the opportunity to serve our guests, and this is another occasion for us to serve by providing an exceptional athletic event for local and international participants who are raising money to fight lung disease.”

Stair climbs have become unique, signature fundraising events for the American Lung Association. Sometimes called a “vertical road race”, participants can use the event as a fitness target or competitive race. But many climbers have a personal reason why they climb: lung disease has impacted the life of someone they love.

The event is limited to the first 600 participants who are 18 years of age or older.

Registration is $50. Climbers are also asked to make a minimum fundraising pledge of $150 to the American Lung Association. ALAN provides online support and personal fundraising coaching to help climbers achieve their fundraising goal.

Twitter: @ScaletheStrat
Facebook: http://www.facebook.com/ScaletheStrat
About American Lung Association in Nevada:
ALAN has been improving the lives of Nevadans since 1916 when it was founded as the Nevada Tuberculosis Association to combat the devastating disease of tuberculosis (TB). Since that time, ALAN has remained constant in the fight against lung diseases and the promotion of lung health. Lung disease is the fourth leading cause of death in America and ALAN is often the first point of contact for individuals with lung disease. ALAN provides practical help and education to people living with asthma, emphysema, and other lung diseases, confronting this disease at the root level by educating kids about the dangers of smoking, providing smoking cessation programs, advocating for smoke-free environments, and working to reduce air pollution.

Scale the Strat participants will scale all 108 floors and 1,455 steps inside The Stratosphere Tower, the highest building west of the Mississippi River.