Three Israel Tennis Centers Board Members will be participating in the upcoming International Jewish Olympics taking place in mid July in Israel. 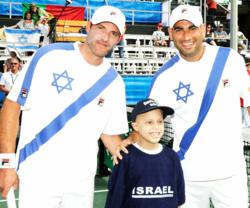 I feel privileged to compete in these Maccabiah games – for the fourth time since 1985.

The Israel Tennis Centers Foundation is proud to announce that three of its esteemed North American board members will be competing in this year’s Maccabiah Games in Israel. Larry Greenspon, International Chair of the ITC, Kevin Green, immediate past International Chair of the ITC and current Canadian President, and Joyce Eisenberg, lifetime ITC board member and benefactor of the Ben B. and Joyce E. Eisenberg ITC – Jerusalem, are all competing in the Maccabiah Masters Tennis competition. The international event is being held in Israel from July 17th to July 30th at various locations, including the Israel Tennis Centers in Ramat Hasharon and Jerusalem.

“Competing at the Maccabiah Games at Ramat Hasharon is a dream come true,” said Mr. Greenspon. “It is very special that these matches are being held at the Israel Tennis Centers, which have transformed the lives of over 400,000 Israeli children over the past 36 years.”

Similar heart-felt sentiments were expressed by Mr. Green. “I feel privileged to compete in these Maccabiah games – for the fourth time since 1985. The size of the Masters and Grand Masters tennis contingent for the 19th Maccabiah Games is the ultimate validation of the Israel Tennis Centers mission; that sports can change and shape children’s lives -- not just during childhood, but for the rest of one’s life.”

“Who would ever think that I would become an Israeli athlete?” added Joyce Eisenberg. “As a benefactor of the Israel Tennis Centers, I hope I can make them as proud of me as I am of all my Israeli children.”

The Israel Tennis Centers has worked since 1976 to enhance the social, psychological and physical development of Israeli youth. The ITC is proud to host the Maccabiah Games, the world’s largest Jewish athletic competition, emphasizing the centrality of the State of Israel in the life of the Jewish people. To mark this important achievement, the ITC is partnering with JLTV to broadcast the tennis matches back to the cable operator’s 42 million households throughout North America.

In honor of its three board members and benefactors competing this year, the ITC will be hosting a special reception to welcome all the Maccabiah Masters and Grand Masters tennis athletes worldwide to Israel. It is scheduled for Sunday, July 21, 7 pm, at ITC- Ramat Hasharon. The evening will include cocktails, a light dinner and program. Transportation from area hotels will be provided. For more information and to RSVP, please contact Jacqueline Glodstein, ITC VP/Global Development, at 646-884-7451 or by email at JGlodstein (at) IsraelTennisCenter (dot) org

The Israel Tennis Centers Foundation (ITC) is a 501 (c) 3 not-for-profit organization that has worked since 1976 to enhance the social, psychological and physical development of Israeli youth. Through the medium of sport, the ITC helps over 20,000 children annually, many of them from disadvantaged neighborhoods or outlying development towns throughout Israel. The ITC’s 14 centers stretch from Kiryat Shmona on the Lebanese border in the North to Beer Sheva bordering the Negev Desert in the South. http://www.israeltenniscenters.org.