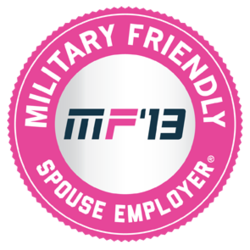 “Military spouses are experts at multi-tasking and thriving under pressure, and they are a highly educated and mobile workforce,” said Babette Maxwell, co-founder and executive editor of Military Spouse.

December’s issue of Military Spouse magazine, on stands November 27th, highlights the top 25 Military Friendly Spouse Employers for 2013. The sixth annual list recognizes those companies which hire spouses of our active duty service members, and make an effort to develop hiring and workforce development policies that acknowledge the unique challenges of military life.

“So many companies today avidly recruit this trusted and valuable workforce," said Babette Maxwell, co-founder and executive editor of Military Spouse. “Military spouses are experts at multi-tasking and thriving under pressure, and they are a highly educated and mobile workforce.”

Military Spouse’s sister magazine G.I. Jobs, surveys companies across the nation to find out which ones really are the best places for people transitioning out of the military to find great civilian jobs. G.I. Jobs considered job-hunting military spouses when they distributed the Military Friendly Employers ® list survey. The survey contained questions that addressed spouses’ biggest concerns:

Financial services company USAA tops the list of America’s Military Friendly Spouse Employers. USAA has secured the top spot five out of the past six years. USAA's president and CEO Joe Robles (U.S. Army, Ret.) started his tenure running the company “with a goal that for every four people we hired, one would be a veteran – either a veteran who served, or the spouse of a veteran who served, because very often the spouse gets left with all of the challenging opportunities to take care of things while the veteran is deployed.”

Army and Air Force Exchange Service came in at the number two spot on this year’s list. “At the Exchange, there’s no greater honor than serving those who serve. And we are honored to be recognized by the Military Spouse Magazine. This recognition once again exemplifies our commitment to employing military spouses,” said Leigh Roop, Vice President of Human Resources.

Military Spouse (http://www.baseguide.com) is published by Victory Media, a veteran-owned business. The company also publishes G.I. Jobs (http://www.gijobs.com) and Vetrepreneur (http://www.buyveteran.com). Military Spouse magazine is the leading national magazine and online destination for the nation's 1.1 million current and 20 million former military spouses. Follow us on Facebook at http://www.facebook.com/militaryspousemagazine and on twitter @milspousemag.