Chicago’s #1 Indie band, The PondHawks, have captured the attention of Euro Indie radio with their new song “Drive”. 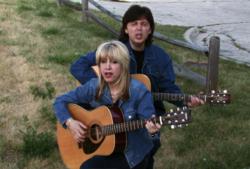 Jorie Gracen and Mario Novelli of The PondHawks

Chicago’s #1 Indie band has taken their song to the top of the Euro Indie charts. After being nominated for “Drive” on Music World Radio (UK), the band entered at #1 on the station’s Top 20 Alternative Songs Chart. A feat MWR says not many artists have achieved.

The PondHawks’ appeal is that they have a sound like no other band. They stand out from the current crop of Indie and Top 40 artists because their music has an edge. The band’s music is influenced by a variety of classic rock legends and has a unique musical quality of its own. Carved with a signature sound that echoes The Beatles, ELO and Wings, The PondHawks have transformed their music into a retro, infused, ‘now’ sound. You won’t hear a song in their catalog that sounds like the last one. What you will hear is a band that can be easily identified by their music. A refreshing change and bold move by an unsigned band that refuses to follow today’s trend.

Mario Novelli and Jorie Gracen founded the band back in 2007 and together, write, produce, record, and perform their own music. Outstanding, male/female vocal harmonies give The PondHawks’ music a rich brilliance. Every song has a catchy melody accompanied by dazzling hooks. Songs are peppered with ‘secret ear candy’ that can only be heard with headphones – a treat for the 79,000 plus fans of the band.

The PondHawks are storytellers. They write about love, romance, life, dreams and beauty, but they also embrace life’s struggles – pain, disillusionment and loss through their own personal experiences. Songs are poetically rich with expression and thought. No words are ever wasted.

The meanings of songs have many interpretations for the listener, and that is deliberate. Their finely crafted lyrics are meant to evoke more than one meaning. At times you may hear a double-entendre – a clever, but subtle invitation to listen to songs over and over.

In March 2010, the band released their critically acclaimed debut album “The PondHawks Have Landed”, which still receives radio airplay in the U.S.A. and Europe. The album placed in several Top 100 Contemporary Albums of the Year charts, taking the #7 spot on the Top 10 Regional Albums list for the Chicagoland area. “The PondHawks Have Landed” was a personal pick by music critic, Tom Lounges of the Northwest Indiana Times, who compiled the year-end list.

In May of 2012, The PondHawks released a five-song EP called “Dreaming Over Ireland”. The title track is a lyrical maze of scenarios, shrouded in mystery and intrigue. The song begins softly, and builds to a techno crescendo. Then it erupts into a burst of keyboards, drums, and guitar licks, paving the way for Gracen and Novelli’s sparkling vocals. The surprise comes when the song morphs into a spirited and infectious rocker, climaxing with an outro that will have you singing and dancing.

“Drive” is a song that unleashes its own fury, portraying a couple’s struggle through clever musical innuendos. Gracen and Novelli depict a rocky relationship that has gone sour. “Drive” has an edge, a grudge, and an attitude. The gritty organ solos have a maniacal charm. Catchy guitar riffs meander throughout, culminating in a riveting power chord that crashes into overdrive.

Like many of The PondHawks’ songs, “Drive’s” frenetic music creates atmosphere and emotion – the perfect marriage of lyrics and music – and a number one hit.

The PondHawks are currently working on their highly anticipated third album, which will be out in 2014.