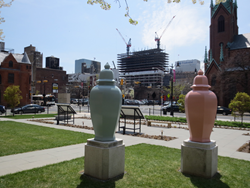 Purchased in 2001, the sculptures were originally placed at the Washington Street entrance to the Museum at about the same time the main entrance was moved to its southern wing. Last year, the sculptures, each painted a different pastel color, were borrowed for an exhibition for which they were restored and placed on new custom cast-concrete pedestals.

According to Chief Curator Ulysses Dietz, the idea to relocate Perfect Vehicles originated with the Museum’s Director of Exhibition Design Tim Wintemberg. “Frankly,” Dietz said, “McCollum’s wonderful sculptures were a bit lost in front of the main building. In Horizon Plaza, they will once again fulfill the artist’s vision and welcome visitors to the museum.”

The Plaza is a unique urban landscape funded in part by a generous $1 million grant from the Horizon Foundation for New Jersey and Horizon Blue Cross Blue Shield of New Jersey, and designed by Michael Graves Associates of Princeton. It was dedicated in 2012 and, at the time, was the first new Downtown Newark green space in decades.

McCollum began making his first Perfect Vehicles in 1985, representing an iconic sculptural form in order to investigate the ways in which a single object can contain cultural meaning. All of the Perfect Vehicle sculptures bear the same shape – that of a Chinese ginger jar, a traditional vessel that has been extensively copied and reproduced for centuries. Each sculpture is thickly painted in a different hue of commercially available paint and has no opening, eliminating a typical use that one might expect of a vase.

The Vehicles invite a range of interpretations. They look like something one might find in the Newark Museum’s Asian Art Department or in the storefront windows of Tiffany & Co. Others might see them as behemoth chess pieces or cartoon abstractions of an English bobby. “It’s just this ambiguity,” Dietz said, “that is of interest to McCollum and each reiteration brings a new layer of interpretation.”