University of Iowa diving record holder and Olympic hopeful Deidre Freeman will compete in the Pan American Games. A Grinnell, Iowa native, Freeman is one of only a few Iowans with chances to compete in next year's Olympic Games. 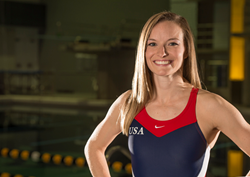 I'm excited for the opportunity to represent the USA, Iowa, and Grinnell with pride.

The U.S. Olympic Committee has announced Grinnell, Iowa-native – and three-time University of Iowa diving record holder – Deidre Freeman will compete in the Pan American Games, July 10-13, 2015, in Toronto. With this announcement, Freeman becomes the first of many celebrated Iowa divers to compete in the prominent event.

Freeman will compete in two events: the 3-meter individual competition on July 12, and in 3-meter synchronized competition alongside former University of Texas diver Maren Taylor on July 13.

“I can't wait to compete on such an important international stage in two events at the Pan American Games,” said Freeman. “I've worked so hard to get to this point in my training and everything seems to be coming together at the right time. I'm excited for the opportunity to represent the USA, Iowa, and Grinnell with pride.”

A member of USA Diving’s 14-person AT&T Olympic High-Performance Squad, Deidre Freeman has already secured her place in the 2016 U.S. Olympic Diving Trials in Indianapolis, Indiana. The daughter of 1980 Olympic Games hopefuls Will and Evelyn Freeman, Deidre was born in Grinnell, Iowa, in 1988. Living her whole life in Iowa, Deidre was a high school diving standout and attended the University of Iowa on a diving scholarship. During her time at the University, she broke, and still holds, three diving records: 1-meter, 3-meter individual and 3-meter synchronized. Deidre currently lives and trains in Iowa City, Iowa. Learn more about Deidre by visiting http://www.deidrefreeman.com. Stay up-to-date with Deidre and her Olympic destiny on Facebook, Twitter and Instagram.