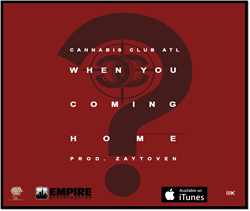 Just in time to kick-off Memorial Day and the Independence Day holidays, Cannabis Club ATL announces the release of their second single in 2016. “When You Coming Home” arrives in position at #87 on the Mediabase Urban Chart and at #4 Digital Radio Tracker Top 50 R&B, Hip Hop Chart. The radio ready single is impacting Urban monitored stations nationwide and is available on iTunes.

“When You Coming Home” expresses the sweeter side of Cannabis Club ATL. Produced by Zaytoven, the song and hook are beautifully wrapped in group member Manal’s soulful lament. It is an emotional pairing of the male and female longing to see each other again. The song evokes the sacrifice and layers (from male members, Fruitman, N.I.L.E and Trapacana) of mental and physical anguish of being away from home and loved ones. The music track drives home a gritty back beat that is characteristic to the Cannabis Club ATL sound. Urban radio is on board in adding “When You Coming Home” to their format as a holiday message. The Legendary Fruitman had this to say, “Our lyrics and music to this song means so many different things to each individual. Wives, mothers, girlfriends, are asking soldiers fighting overseas, as well as the average person working whatever hustle they may have in the streets; when you coming home? Their responses may not be enough as they’re bound to their duties and commitments. Are any of them really home emotionally and physically when you find out - what’s keeping them from being home?”

Music Choice has added the song to its Hip Hop and R&B Channel. Currently, Cannabis Club ATL and the single have hit the All Access “Cool New Music Chart,” while at #87 Mediabase, and are #4 on the Digital Radio Tracker Chart. Money Tree Entertainment has launched the song’s lyric video, on YouTube. The label is also in pre-production for the official “When You Coming Home” mini-feature video.

GET IT Available on iTunes