“Daybreak” from Christian Faith Publishing author Jacqueline Johnson Goon tells the author’s struggle to overcome the haunting memories of abuse at the hands of her late husband. Through faith, she finally sees God’s plan for her. 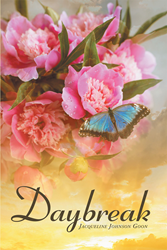 “Daybreak”: how faith can heal even the deepest of scars. “Daybreak” is the creation of published author, Jacqueline Johnson Goon. Jacqueline Johnson Goon was born and raised in Florence, Mississippi. In 1985, she and her husband relocated to Washington State. They currently reside on the Eastside of Seattle where they are afforded a spectacular view of Lake Washington and Mt. Rainier as well as the Olympic and Cascade mountain ranges. Their two daughters are married and have blessed the family with two wonderful sons and four beautiful grandchildren. In addition to writing, she enjoys music, gardening, and, of course, babysitting.

“I am a survivor of several life-threatening events, and yet I could not leave. Why? Perhaps because of my children. Maybe because I was trying to honor my wedding vows. Could be because I loved my husband. Most likely it was because I was afraid of my husband because he often threatened to follow me wherever I’d go.” --Jacqueline Johnson Goon

Author Jacqueline Johnson Goon was a victim of domestic violence. The first time she was physically abused happened one month after her wedding day. Like many women, she chose to remain in a relationship that was both mentally and physically abusive. She did not divulge the abuse to anyone, including her family, due to the shame. She struggled with the reality of her torment, the memory of how her husband had been, and the dream for how he could have changed.

A few months before their fifth anniversary, her husband became seriously ill. It was she who nursed him through his painful and untimely death. Remarried and decades later, she continued to relive the painful memories through haunting dreams. Her restless soul seemed locked in a battle of fear and regret, seeking freedom from torment and pain. Finally, God gave her a vision of her future and of His plan for her.

Consumers can purchase“Daybreak” at traditional brick & mortar bookstores, or online at Amazon.com, Apple iTunes store, Kobo or Barnes and Noble.

For additional information or inquiries about “Daybreak”, contact the Christian Faith Publishing media department at 866-554-0919.