The 26th Annual April Fools' Day Parade begins at Fifth Avenue and 59th Street at 12 noon, Friday, April 1st, 2011. Rain or shine, the parade will march down to Washington Square Park for post-parade festivities and selection of the King of Fools from the marching costumed look-alikes. The New York April Fools' Day Parade was created by artist and satirist Joey Skaggs in 1986 to commemorate the perennial folly of mankind. The public is encouraged to participate, in or out of costume, with or without floats, and may join the procession at any point along the parade route. Over the years, the parade has grown from a small grass roots group of artists and activists to thousands of participants. 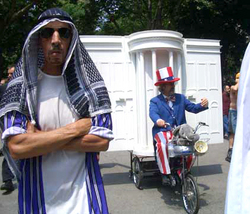 "The April Fools' Day Parade is a fun way for the general public to creatively vent their outrage over the social and political craziness of the year.” Organizer, Joey Skaggs

The 26th Annual April Fools’ Day Parade will begin at Fifth Avenue and 59th Street at 12 noon, Friday, April 1, 2011. Rain or shine, the parade will march down Fifth Avenue to Washington Square Park for the post-parade festivities and selection of the King or Queen of Fools from the costumed marching look-alikes.

Says organizer Joey Skaggs, "The April Fools' Day Parade is a fun way for the general public to creatively vent their outrage over the social and political craziness of the year.”

The theme for this year’s parade is “If It Wasn’t For Bad Luck I’d Have No Luck At All.” The parade will kick off with a Bob Dylan classic “A Hard Rain's A-Gonna Fall” sung by the very vocal WTF! Chorus including General Stanley McChrystal, ex-Republican Party Chairman Michael Steele, actors Lindsay Lohan and Charlie Sheen, Representative Charlie Rangel, and deposed Egyptian President Hosni Mubarek look-alikes. Color commentary will be provided by Governor Mike Huckabee. It may be inaccurate but it will be colorful.

This year’s floats will be lead by Grand Marshall Tony Heyward, whose Lap Pool float filled with crude oil will feature BP, Halliburton and Trans Ocean executives bobbing in the muck. Parade attendees are encouraged to bring stuffed birds, animals and fish to toss into the pool as the float passes. Next will be the corporate-sponsored Supreme Court float featuring justices completely covered with corporate logos waving banners proclaiming “Corporations Are People Too!” They will be followed by the Congressional Marionnette Show float with lobbyists pulling the strings of dancing elected officials. Next is the giant Royal Wedding Cake Piggy Bank driven by Elton John, featuring Prince William and Kate Middleton on top. Uniformed royal guards will be asking for spare change from the crowd to help pay for the wedding. And then there will be the Middle-Class Backyard Russian Spy float equipped with lawn chairs, a barbecue, and an above-ground pool. The beautiful sexy Russian spy Ana Chapman will be handing out hot dogs to the crowd. Next is the State of Arizona float driven by Governor Jan Brewer as a wall is being constructed by illegal Mexican immigrants. This will be followed by a motorized 30-foot miniature of the USS Enterprise commanded by Captain Honor projecting lewd and lascivious videos for the crowd to see. The Pope will make an appearance in his new decked-out Pimpmobile tossing colored condoms Mardi Gras–style to the crowd. Throughout the parade fleeing Arab Dictators and Tyrants will dash along carrying bulging suitcases overstuffed with American dollars. The Topeka Westborough Baptist Church float will bring up the rear protesting everything and damning everyone to Hell.

As the parade ends at Washington Square Park, the party begins, featuring live music, food, concessions & entertainment. The TSA booth will be offering free Polaroids of your naked body scan. Mel Gibson will be distributing a CD of his “Best Rants Against Blacks, Jews and My Wife”. The Texas School Board will be giving away rewritten textbooks portraying their own version of history. Texas Representative Deborah Riddle will host a day care booth for “terror” babies born to illegal immigrants. The Times Square Car Bomber Faisal Shahzad will be giving a how-to demonstration using recalled Toyotas. A clandestine U.S. Psy Ops booth, posing as a Hawaii time-share office, will convert all visitors into war-mongering hawks; Free massages will be available, sponsored by Vice President Al Gore.

The New York April Fools’ Day Parade was created in 1986 to remedy a glaring omission in the long list of New York’s ethnic and holiday parades. These events fail to recognize the importance of April 1st, the day designated to commemorate the folly of mankind. In an attempt to bridge this gap and bring people back in touch with their inherent foolishness, the parade annually crowns a King or Queen of Fools from parading look-alikes. The King of Fools from the 2010 parade was Glenn Beck.

The public is encouraged to participate, in or out of costume, with or without floats, and may join the procession at any point along the parade route. Floats can be no wider than 10’ and no longer than 30’. They can be self-propelled, towed, pushed or pulled. Customized bicycles, tricycles, baby carriages and aerial balloons are welcome. All participants are costumed look-alikes, and the Parade Committee assumes no liability for damages caused by satire. Parade floats and marchers must be at 59th Street and Fifth Ave no later than 11:30 a.m.

We are grateful to the Koch Brothers, Donald Trump, the NY State Council on the Arts, National Endowment for the Arts and Mayor Michael Bloomberg for their annual support. We also welcome WPIX-TV, who will sponsor the live telecast this year.

The King of Fools will be chosen based on the loudest cheers at Washington Square Park. The winner will reign through March 31, 2012.