'The Reflecting Pool' A New 9/11 Investigative Drama That Challenges The Official Version Of 9/11 Events, Released on DVD

A new 9/11 investigative drama that challenges the official version of 9/11 events, 'The Reflecting Pool', is now available on DVD from reflectingpoolfilm.com. 'The Reflecting Pool' follows a journalist who teams up with the father of a 9/11 victim to investigate the official version of the events. Their findings pose a disturbing question that has no easy answer: To what extent was the U.S. Government at fault for the attacks? 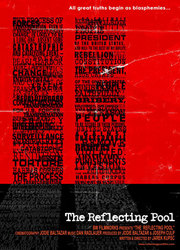 We join the millions of people calling for a new, non-governmental, independent investigation of the 9/11 events. It's time to stop marginalizing the issue and demand answers about what happened that day.

The first edition DVD of 'The Reflecting Pool', a new 9/11 investigative drama that challenges the official version of 9/11 events, is now available from reflectingpoolfilm.com. 'The Reflecting Pool' follows an investigation by a skeptical Russian-American journalist who teams up with the father of a 9/11 victim to "fact check" the official version of the tragedy as documented in the 9/11 Commission Report. As they examine evidence and interview key eyewitnesses, the official story begins to crumble. 'The Reflecting Pool' is the first investigative drama to present this issue in the spirit of such films as 'All the President's Men' and 'JFK'. The movie's theme reflects the recent New York Times/CBS News opinion poll, in which the majority of Americans believe the Bush administration is not telling the truth about the September Eleven events.

Writer/Director Jarek Kupsc plays Alex Prokop, a successful journalist who receives a mysterious 9/11 videotape revealing new information on the attack. Joseph Culp appears as Paul Cooper, the man who sent the tape and a driven researcher whose daughter died on 9/11. Though skeptical of conspiracy theories and fearful that it will jeopardize his career, Prokop agrees to take on the story with encouragement from his editor and a former Gulf War correspondent, McGuire, played by Lisa Black.

We follow Prokop and Cooper as they investigate the inexplicable collapse of the 47-story WTC Building 7, disprove the implausible airliner attack on the Pentagon, uncover the illegal destruction of physical evidence from Ground Zero, and discover information that the White House knew an attack was imminent. The results of their investigation suggest the official version as presented in the 9/11 Commission Report purposely ignored or omitted vital evidence and testimonies to protect people in political positions, including the present administration. Prokop, plagued by the ghosts of his Communist childhood and trying to uphold the independence of American journalism, struggles to come to grips with this awful truth.

'The Reflecting Pool' DVD Features
'The Reflecting Pool' DVD includes 'Revealing the Sources' a commentary that documents sources used to create the film including articles, quotes, and references from established sources (including CNN, FOX News, The New York Times, and the U.S. Government). Often, these news articles and transcripts have been deliberately marginalized, buried, obscured, and made difficult to find by the average citizen.

About 'The Reflecting Pool'
'The Reflecting Pool' was shot on location in Los Angeles, New York and Washington D.C. It premiered theatrically through American Cinematheque to a standing-room only audience on January 31, 2008, at the Aero Theatre in Santa Monica, CA. The movie played throughout February in Los Angeles and continues with select local screenings and festivals nationwide. The New York premiere is planned for June 2008. 'The Reflecting Pool' trailers posted on YouTube.com have already topped 55,000 views. Jim Cirile of Creative Screenwriting Magazine says, "New feature film 'The Reflecting Pool' may just be the 'All the President's Men' of our time. No, it doesn't have Hoffman and Redford. But it is a chilling and important fact-based investigative drama."

About the Filmmakers
'The Reflecting Pool' was independently produced and financed by Baltazar Works with Jodie Baltazar and Joseph Culp serving as producers. 'The Reflecting Pool' is director Jarek Kupsc's third feature film. He won multiple awards for his debut feature 'Recoil' and recently won Best Picture for 'Slumberland' in his native Poland. Kupsc gives his view: "We wanted to tell a human story about what happens when the media and government distort or hide historical fact and to show the struggle one must go through for their own sense of integrity." He continues, "September 11th, 2001, was a defining moment in modern history--an event that propelled America toward preemptive wars under false pretenses resulting in the deaths of over a million civilians in the Middle East, thousands of American troops, and a complete disregard for the Geneva Conventions not to mention the Bill of Rights." Culp says, "'The Reflecting Pool' is a way of taking stock of what has happened to our country after 9/11 and to do the most American thing of all--ask questions and demand honest answers." Baltazar adds, "We join the millions of people calling for a new, non-governmental, independent investigation of the 9/11 events. It's time to stop marginalizing the issue and demand answers about what happened that day."

Comments on THE REFLECTING POOLComments and Reviews by peace activists and critics.