Aashika, a Talented Member of Girl Pow-R, Recently Released a New Cover of 'Memories' by Maroon 5 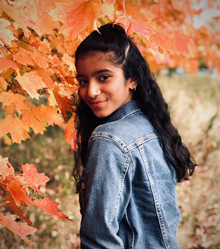 "It’s always important to reflect on what went wrong so you can make it better for next time."

Aashika, one of the talented members of the rising pop supergroup Girl Pow-R, recently released a new cover of 'Memories' by Maroon 5.

“I wanted to post a cover for the new year and I thought 'Memories' was a perfect choice. It talks about all of the memories of 2019 as we are starting into a new year, 2020," said Aashika. "When a new year has begun, I always like to reflect on what happened in that past year ('bring back all the memories'), whether good or bad. It’s always important to reflect on what went wrong so you can make it better for next time.“

“One of the great memories I had in 2019 was joining Girl Pow-R!" said Aashika. "It’s been amazing and I have learned so much."

Girl Pow-R is an all-girl pop-rock band. It was formed in 2017 and has been rising ever since. Girl Pow-R has performed more than 200 shows and has performed in the Boys of Summer Tour in the United States in Washington DC, Philadelphia, New York and Boston. Each girl in the group has been focusing on their own social causes like feeding the homeless, sick children's hospitals and youth safety. Girl Pow-R’s goal is to empower young girls to follow their dream and not let anyone say they “can’t."

For the launch of their first album this past summer, 'This Is Us', they were on television, interviewed on Breakfast Television, CityTV, CP24 Breakfast and Sirius XM Radio. Girl Pow-R has almost 450,000 views for their videos on YouTube and when they launched their single "Never Let Go" they had more than 700,000 listens of that song across all social media platforms.