Behind the Three Stripes – An Exclusive Interview with Adidas Group's CEO

During the World Cup match between Portugal and North Korea, just-style.com’s news editor Joe Ayling sat down with Herbert Hainer, CEO of Adidas Group for an exclusive interview. Topics covered included the company's investment in the World Cup, sourcing, currencies and the vision for the Reebox brand. 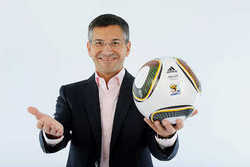 Hebert Hainer and the Jabulani

2009 was a difficult year because of the financial and economic crisis. But it was not just the consumption within individual countries that raised challenges; it was for us the currencies that played mainly against us.

At the Adidas headquarters in Germany, in a room adjacent to a meeting room full of Adidas staff watching Portugal’s footballers beat North Korea 7-0, Hainer talked about himself, the business he leads and the sports it profits from most.

"We are the dominant brand at the World Cup so far," Hainer says. "It's not just that we have more teams than any of our competitors, it's also the official match ball, the referees, the ball boys, the billboards - you can't miss the three stripes." Adidas spends about 13% (EUR1.3bn) of net revenues on annual marketing, with football having a huge chunk of this. However, it’s expected that the launches and sponsorships will result in record sales - around EUR1.5bn - of football products this year.

Sitting in front of a display featuring the controversial Jabulani football, Hainer explains to just-style the features of the ball that was invented for the World Cup. In face of the mixed reviews, Adidas are obviously proud of the Jabulani as they have giant replicas all over the HQ.

Whilst, Hanier says that he has the perfect job, he admits that 2009 was his most difficult as CEO, lead by a drop in demand and the strength of the Euro. He tells just-style: "2009 was a difficult year because of the financial and economic crisis. But it was not just the consumption within individual countries that raised challenges; it was for us the currencies that played mainly against us.”

Five years prior to Hainers ‘most difficult year’ he was instrumental in Adidas’ decision to acquire rival sportswear brand Reebok. After an initial slump in sales, there are recent signs that the decision to reposition the Reebok brand is paying off. "We have given Reebok a clear new direction of where we want to have it. It should be the fitness and training empire - this is where Reebok is coming from where the brand still has the strongest link to the consumer."

This exclusive interview with Herbert Hainer is available for full members’ of just-style.com only. To gain access to this interview along with apparel industry news, insight and intelligence visit: http://www.just-style.com/membership.aspx