Having an Affair? It's Simple Mathematics...

IllicitEncounters.com have released the mathematic equation for the 'Perfect Affair', revealing to those pursuing an affair what traits to look for in a lover. 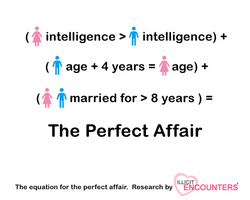 IllicitEncounters.com have discovered the formula for the perfect affair 'match'

All extra-marital relationships differ in what makes them work, but through our extensive research we have seen there are a few common values shared by the very successful ones

IllicitEncounters.com, the UK's largest extra-marital dating agency has come up with a mathematical formula for the perfect affair.

The equation has been released in response to a recent study by the Geneva School of Business, who claim to have found a mathematical formula for creating the perfect marriage.

Taking the case studies of 500 members from the over the last three years, IllicitEncounters.com claim that there are three main factors that guarantee a perfect 'affair match'.

1) According to the Geneva study, a male should be 5 years older than his wife for a perfect marriage, but for the perfect affair the female of the couple should ideally be 4 to 6 years older than her male partner. This ensures compatibility of sex drive, as many women find their libido increases the older they get.

2) Mirroring the Geneva study, which suggests that for a perfect match the female should be 27% smarter than her partner, the site also found that relationships between couples where the female is smarter tend to be less volatile. Art and music tastes are important too: men should look for a lover who is as cultured, if more cultured, than them.

3) Finally, the most successful affairs happen when a person has been married for over 8 years. Couples who embark on their affair before this point seem to see less of an improvement in their marriage than those who embark on one afterwards.

"All extra-marital relationships differ in what makes them work, but through our extensive research we have seen there are a few common values shared by the very successful ones" says Sara Hartley, spokesperson for IllicitEncounters.com. "Age is important. Couples tend to be most sexually satisfied when the female partner in the pair is considerably older."

"The stage at which one pursues an affair also matters. For many people conducting an affair before 8 years of marriage, infidelity is a way out, and is pursued, consciously or unconsciously, with the intention of ending a relationship. After the 8 year mark, we find spouses decide to have an affair as a practicality; their reasoning is much more solid - they do not want to leave their partner, but something is missing which they feel they can substitute in from somewhere or someone else."

IllicitEncounters.com has been running since 2003, and now has in excess of 430,000 members.