An exciting aviation adventure for middle school students takes off in Dayton in June and July! Applications will be accepted at http://www.AirCampUSA.com through April 30. 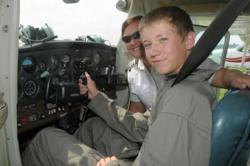 Middle school students learn to pilot a plane and to appreciate the science, technology, engineering and mathematics of aviation and aeronautics.

Flying in the plane was the best experience of my life!

In just its third year of operations, Air Camp is expanding in summer 2012 to offer three camp sessions in Dayton, Ohio, the birthplace of aviation. Since Air Camp’s inception in 2010, middle school students have traveled from across the U.S. to experience the wonders of flight and the science, technology, engineering, and mathematics (STEM) of aviation and aeronautics. The University of Dayton campus serves as the host facility for housing and meeting space.

From the UD campus, students will explore behind the scenes at the area’s major aviation and history sites, including the Air Force Research Laboratory, the National Museum of the U.S. Air Force, Dayton History, and the Boonshoft Museum of Discovery. Throughout the week, students engage in hands-on learning and STEM-related experiments guided by award-winning teachers, including a visit to the Appenzeller Visualization Laboratory at Wright State University and an exercise in piloting micro-UAVs. Students receive flight training at Sinclair Community College, co-pilot a plane at the Dayton-Wright Brothers Airport, and experience the full range of aviation operations. In 2012, students will have the opportunity to learn airplane wing design through the use of a new wind tunnel, acquired through a grant from the Engineering and Science Foundation of Dayton.

"When I see the excitement in the eyes of Air Camp students, and watch them working together to solve tough problems, it tells me that we truly have the ‘right stuff’ to restore the USA to first place in the production of scientists and engineers," said Lt. General Richard V. "Dick" Reynolds, USAF (retired), test pilot and aeronautical engineer, who serves as secretary of the Air Camp Executive Committee.

The 2012 summer sessions are planned for June 17-22, July 8-13, and July 22-27. Up to 40 students will be chosen for each session by a competitive application process. Applications are being accepted online through April 30 at http://www.AirCampUSA.com from students entering the seventh through ninth grades in fall 2012. A teacher recommendation is also required. Tuition is $995, with a limited number of need-based scholarships available.

The students who participated in the first two years of Air Camp were highly enthusiastic. “Flying in the plane was the best experience of my life,” said one student. “This was an amazing event I'll never forget!” A student wrote last fall, “I miss Air Camp so much. Air Camp made me feel so independent. We had to solve problems on our own, and it felt so good.”

As a not-for-profit entity, Air Camp is made possible by donations, sponsorships, scholarships, and in-kind support from individuals, foundations, businesses, colleges and universities, government agencies, and individuals. Donations may be made online at http://www.AirCampUSA.com.

Hosted in the Dayton, Ohio region – the birthplace of aviation – Air Camp is a one-week adventure in the wonders of flight and the science, technology, engineering, and math of aviation and aeronautics, designed to inspire middle school students to “soar into the future.” For further information, visit http://www.AirCampUSA.com or find us on Facebook.

Air Camp students explore behind the scenes at the Wright-Patterson Air Force Base in Dayton, Ohio.