Medical scientist discovery of drinking alkaline ionized water as an alternative treatment for Leukemia and Cancer is reviewed in the Health Water Report that Bawell published today. 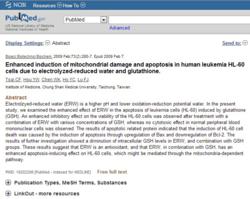 The prime cause of cancer is the replacement of the respiration of oxygen in normal body cells by a fermentation of sugar. In Asia, alkaline drinking water is considered a regular part of treatment and regularly given to cancer patients.

The scientific study on using Electrolyzed-reduced water (ERW) to treat Leukemia Cancer cells was reviewed in the report published today by Bawell Health Water. All the different models of water ionizers that Bawell offers can produce the Electrolzyed-reduced water that was used in the PubMed scientific study. The study of using alkaline water in treating Cancer cells, reports “These results suggest that ERW is an antioxidant” (US National Library of Medicine).

This current PubMed study confirms the research and studies conducted by the 1931 nobel prize winner Otto Warburg. Bawell’s report says Warburg found cancer cells maintain a pH that is as low as 6.0, and Warburg believed that there was a direct relationship between oxygen and pH. There are a higher concentration of oxygen molecules when pH is higher, and when pH is lower there are lower concentrations of oxygen molecules. "Summarized in a few words, the prime cause of cancer is the replacement of the respiration of oxygen in normal body cells by a fermentation of sugar" (Otto H. Warburg).

Bawell also reviewed the Cancer research by Dr. Keiichi Morishita. Quoting the Dr. in his book "The Hidden Truth of Cancer" where it states when blood develops an acidic condition the waste is deposited throughout the body, and after years the body continues to become more acidic finally causing cell death. To survive, the cells in the acidic area of the body become abnormal or malignant, and no longer respond to brain commands. The malignant cells that are now not under the control of the brain begin to undergo cell division, which is called Cancer.

The Bawell report continues by saying, “Dr. Morishita explains that treating malignant cells with chemotherapy, radiation, or surgery as if they were a virus or bacteria does not take into account the underlying cause of the Cancer, the acidic environment. The de-acidifying effect is why drinking water that has a high alkaline pH will help in preventing cancer. In Asia, alkaline water is considered a regular part of treatment and regularly given to patients.”

The different water ionizer models that Bawell offers can produce a range of pH alkaline water, so clients can make their own ionized water at home with the exact pH required to target specific needs. The Bawell water ionizer company has been in the business of manufacturing this equipment for the past 10 years. With over 1,000,000 customers worldwide Bawell has become the most trusted internationally recognized name in the alkaline water ionizer industry. Discover more about them by visiting http://www.bawellwaterionizers.com/aboutus.html.