Advocates from across the country are preparing to unite on Capitol Hill this month as The ALS Association hosts the 2009 National ALS Advocacy Day and Public Policy Conference. 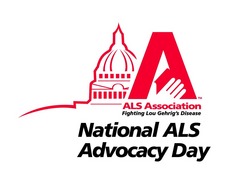 This disease robs people of the ability to move, to walk, to speak and ultimately breathe on their own

Advocates from across the country are preparing to unite on Capitol Hill this month as The ALS Association hosts the 2009 National ALS Advocacy Day and Public Policy Conference. The three day conference, which will take place May 10-12 in Washington, D.C., provides the ALS community with an opportunity to come together, share their experiences and hopes, and urge Congress to join the fight against Lou Gehrig's Disease.

"Roadmap to a Cure" is the theme of this year's conference, which is the single largest annual gathering of the entire ALS community. Through advocacy , The Association is creating the roadmap that will lead to the treatment and cure for ALS.

Currently, there is no known cause of ALS or effective treatment for the progressive, neurodegenerative disease that took the life of baseball legend Lou Gehrig, and which now bears his name. The disease is fatal in an average of just two to five years following diagnosis.

"This disease robs people of the ability to move, to walk, to speak and ultimately breathe on their own," said Steve Gibson, vice president of government relations and public affairs for The Association. "The Advocacy Conference gives them the opportunity to fight back and make members of Congress partners in the effort to find a treatment and a cure."

Efforts made at last year's conference led to a number of significant victories, including:

The nearly 1,000 people - including approximately 100 people with ALS - from throughout the country who are expected to attend this year's conference will seek to ensure that Congress continues funding for these vital programs and that military veterans receive the care they need, deserve and have earned.

"Studies continue to show that ALS strikes military veterans at approximately twice the rate as those who have never served in the military," Gibson said. "It's important that members of Congress and the public know that by fighting for people with ALS, they also are fighting for our heroes serving in the military."

In addition to Advocacy Day on the Hill, which takes place on May 12, attendees have the opportunity to participate in a number of other important conference activities, including:

In addition, some of the world's top ALS researchers will be on hand Monday, May 11 for a research plenary session to deliver the latest news on exciting ALS research planned and underway, including research made possible through The Association's advocacy efforts. Later in the day, a panel of experts will share about the promise stem cell research holds for ALS.

Just prior to a meeting with members of Congress on May 12, advocates will join The Association in recognizing those leaders in Congress whose extraordinary efforts have driven the ALS community closer to a cure. At the Celebration of Excellence Breakfast and Awards Presentation, The Association will present the Jacob K. Javits Public Service Award, named in honor of the former New York senator who lost his life to ALS, and the Henry A. Wallace Public Service Research Award, named for the former U.S. vice president whose life also was cut short by ALS.

The Schillings are being recognized for their sustained and dedicated efforts in advocacy, awareness and fundraising, for significantly impacting research and patient care programs provided by The Association to find a cause and cure for ALS, and to improve the quality of life for people living with the disease, their families and caregivers.

The ALS Association is the only non-profit organization fighting Lou Gehrig's Disease on every front. By leading the way in global research, providing assistance to people with ALS through a nationwide network of chapters, coordinating multidisciplinary care through certified clinical care centers, and fostering government partnerships, The Association builds hope and enhances quality of life while aggressively searching for new treatments and a cure.