At a time when book buying decisions are more influenced than ever by online reviews, Susan Mallery’s Just One Kiss has topped 500 customer reviews on Amazon – with an average of 4.5 out of 5 stars – after a mere three weeks of release. A free excerpt of Just One Kiss is available at http://www.SusanMallery.com. 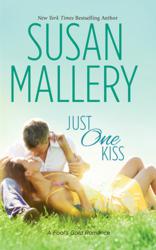 Just One Kiss by Susan Mallery

At a time when book buying decisions are more influenced than ever by online reviews, Susan Mallery’s Just One Kiss has topped 500 customer reviews on Amazon – with an average of 4.5 out of 5 stars – after a mere three weeks of release.Just One Kiss is the first book of Mallery’s summer trilogy of small town romance novels set in fictional Fool’s Gold, California, and will be followed by Two of a Kind in July and Three Little Words in August. Just One Kiss is available in paperback, ebook, and audio.

“I’ve said for years that I have the best readers in the world,” Mallery says. “Certainly the most generous. I’ve sent letters to my mailing list and written posts on Facebook, educating my readers about the important role that the number of reviews plays. In the past, I think they felt that a review was unnecessary if another reader already said what they were thinking. But once they understood that having a large number of reviews would help my books to reach a wider audience, they came out in force to support me.”

Her previous book, Three Sisters, a Blackberry Island novel that was released in March, has over 800 reviews, also with an average of 4.5 stars.

Amazon editors have taken notice of Mallery and her books, as well. In a recent Amazon Editorial Review, editor Alyssa Morris said, “Just One Kiss will leave you wanting more… a sweet and cozy romance that you can sink into instantly, surrounded by loving families and loyal friends.”

Just One Kiss was featured as a Kindle Select book – one of 25 novels the Amazon editors felt their readers would love.

Mallery is known for writing laugh-out-loud love stories with characters who ring true to life. Set in quirky Fool’s Gold, Just One Kiss is about a single mom who comes into an inheritance at the same time as a her first teenage crush resurfaces. He’s back to open a bodyguard school, and to reconnect with the girl he never forgot. But Patience isn’t sure she can trust him to stick around – and this time, her young daughter’s heart is on the line, too.

A free excerpt of Just One Kiss is available on Mallery’s website, http://www.SusanMallery.com.

With more than 25 million books sold worldwide, New York Times bestselling author Susan Mallery is known for creating characters who feel as real as the folks next door, and for putting them into emotional, often funny situations readers recognize from their own lives. Susan’s books have made Booklist’s Top 10 Romances list in four out of five consecutive years. RT Book Reviews says, “When it comes to heartfelt contemporary romance, Mallery is in a class by herself.” With her popular, ongoing Fool’s Gold series, Susan has reached new heights on the bestsellers lists and has won the hearts of countless new fans.

Susan grew up in southern California, moved so many times that her friends stopped writing her address in pen, and now has settled in Seattle with her husband and the most delightfully spoiled little dog who ever lived. Visit Susan online at http://www.SusanMallery.com.