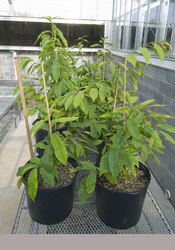 They were actually stunned at how fast it spread.

In their prime, the American chestnut trees stood a hundred feet tall and six feet wide. Now, they're typically no bigger than shrubs, thanks to a fungal disease that spread down the East Coast decades ago, virtually wiping out the hardwood tree.

But researchers in the University of Georgia Warnell School of Forestry and Natural Resources, with support from ArborGen LLC, a leader in tree improvement and commercial production of trees, have developed a method for inserting anti-fungal genes into the tree's DNA. They hope the new genes will fight off the fungal disease and help restore the American chestnut to its former glory. The results of Scott Merkle's 20-year effort are detailed in a new paper published in the journal Plant Cell Reports, where he and associates Gisele Andrade and Joe Nairn describe the system they developed to insert new genes into the tree's DNA and to propagate trees that carry the genes.

"The gene transfer system described in the new paper has already been used to produce some trees with genes that may confer resistance to the fungal disease," said Merkle, "and ultimately could be used to help restore the tree to our eastern forests."

The American chestnut used to grow from New England down the East Coast, abundantly through the Appalachians. It was a valuable resource for the U.S., Merkle explained, as it was a fast-growing tree that was used in construction, leather-making and as a dependable nut crop. But in the 1880s, people began to import Asian chestnuts to plant in their yards and with these trees came the fungus that attacked the American trees. The first documented instance of what became a widespread blight was in what is now the Bronx Zoo. A forester noticed the American chestnuts planted along the streets were dying. By 1904, the fungus had been identified as Endothia parasitica (eventually renamed Cryphonectria parasitica), but it was too late: The fungal disease spread rapidly, infecting Georgian trees by the 1940s.

"It happened amazingly fast," Merkle explained. "They were actually stunned at how fast it spread."

Merkle began researching the American chestnut blight in 1989, and has published several papers on the subject. In the past 20 years, he and his team of research associates and graduate students have been studying ways to get the chestnut trees to fight off the fungus. The disease works by attacking the chestnut after the bark has been injured, fanning out and killing the inner bark layer, eventually girdling the tree so that food and water cannot move up or down the stem.

So while the American chestnut used to grow more than a hundred feet tall, now they are usually no more than six feet tall before they are killed by the fungus, Merkle said. Most are just shrubs before they die, although larger surviving chestnuts have been found in isolated areas.

Merkle hopes to change that. After years of research, he and Andrade devised a way to grow chestnut trees from single cells and then found an effective way to separate the genetically engineered cells from the cells that did not have the inserted genes. Now, they've used their system to insert an anti-fungal gene, obtained from collaborator William Powell at SUNY College of Environmental Science and Forestry, into chestnut trees that are being grown in a Warnell greenhouse in preparation for testing the ability of that inserted gene to fight off the fungus.

The way they'll do that, Merkle said, is by infecting the tree with the fungus and measuring how well it fights it off. It'll be at least two years before they can take that next step in the research, however, since the trees have to grow to a certain size before they can be screened.

"It's been a real challenge working with it," he said. "But the potential is there."