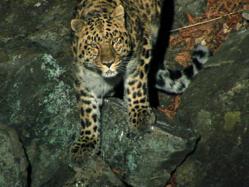 Barabashevskii is the dominant male amur leopard (Panthera pardus orientalis) in all of Kedrovaya Pad nature reserve in south-eastern Russia, though his home range spreads beyond this protected territ

Amur leopards are literally teetering on the brink of extinction.

World Wildlife Fund (WWF) today announced the establishment of a new national park in Russia as part of efforts to save the world’s rarest cat – the Amur leopard. Around 30 Amur leopards are believed to exist in the wild, the majority of which reside in the new Land of the Leopard National Park in Russia’s Far East. The national park includes around 60 percent of the critically endangered cat’s remaining habitat.

“Amur leopards are literally teetering on the brink of extinction,” said Dr. Sybille Klenzendorf, head of WWF’s species program. “With the establishment of Land of the Leopard National Park, in conjunction with other conservation efforts, we can now start to focus on how to begin bringing them back.”

Land of the Leopard National Park, which includes all of the Amur leopard’s breeding areas, extends across nearly 650,000 acres (262,000 hectares). The national park will also become home to 10 Amur tigers that are key for Changbaishan population in China and a valuable Korean pine forest.

The park will be comprised of various zones, including protected areas, an economic development zone, and a recreational zone that will include forested areas and sites for eco-tourism. The government of Russia has announced an investment of around $16.6 million for the development of the park’s infrastructure, and another $1.3 million towards its upkeep.

Since 2001, WWF has supported the establishment of the Land of the Leopard National Park in Russia as critical to ensuring the survival of Amur leopards, as well as Amur tigers.

Due to extensive habitat loss and conflict with humans, Amur leopards are critically endangered, with fewer than 50 believed to remain in Russia and China. The Amur leopard is also known as the Far East leopard, the Manchurian leopard or the Korean leopard. Read more about the Amur Leopard here.