AppsGeyser, the online Android app tool platform, has created an app progress monitor to help the success of Android apps built with their Android app builder. 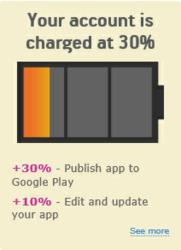 The AppsGeyser app monitor is a visual tool to help guide the app makers on to the path of app success.

The creation of free Android apps has been made relatively simple by the team at Appsgeyser, however, there are many app makers that are still finding it difficult to create an app that becomes successful, and is able to create revenue and promote their businesses successfully.

The steps to ensure the app maker is on the road to app success include creating an app, publishing the app to Google play, updating and editing the app, sending push notifications and building an app empire to help promote the apps internally and build an app reputation.

New app maker Stuart Smith agreed, “I created my first app over four months ago, and it looked amazing, but nothing was happening with it. I hadn’t considered that I may need to follow up on the app and edit it and build more apps to help promote my ‘app brand’. The new progress monitor soon put my apps on track.”

“It is important for us at AppsGeyser to not only have apps created without Android app builder, but for these apps to be successful apps,” AppsGeyser Co-founder Vasily Salomatov told us. “The AppsGeyser app monitor is a visual tool to help guide the app makers on to the path of app success.”

About AppsGeyser
AppsGeyser, launched in February 2011, is a fast growing Android app creation platform. AppsGeyser enables users to create apps for Android devices from any web content in under five minutes. AppsGeyser has seen more than 440,000 apps created on its platform. There have been more than 301 million downloads of its apps.