A Wake-Up Call to the Church with Anne Graham Lotz and Joel Rosenberg September 11, 2011 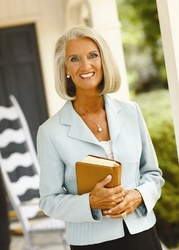 Instead, what if this time next year, churches all across America marked this anniversary – not by looking around, but by looking up and getting right with God?”

AnGeL Ministries, the ministry of Anne Graham Lotz, today announced plans for a worldwide simulcast to be offered for broadcast into church sanctuaries and homes on September 11, 2011–the ten-year anniversary of the attack on America.

“This 9/11, one small church in Florida is capturing the world’s attention with its controversial Qur’an-burning plans,” says Anne Graham Lotz. “Instead, what if this time next year, churches all across America marked this anniversary – not by looking around, but by looking up and getting right with God?”

The planned simulcast, offered as “A Wake-Up Call to the Church” will include teaching messages from Anne Graham Lotz, Bible teacher and award-winning author, and Joel Rosenberg, New York Times best-selling author of The Epicenter and Inside the Revolution, and an authority on Bible prophecy.

“Sunday, September 11, 2011, will mark the tenth anniversary of the attack on America. I have long felt the original 9/11 attack was allowed by God as a wake-up call for His people – a time to look up and get right with Him,” says Lotz. “But did we sleep through the alarm? My prayer is that this simulcast, held on such an historic anniversary, would serve to gather the church and reissue the wake-up call to the hearts of Christians everywhere. It is my prayer that it would refocus us on Jesus as our Hope for the future and re-ignite such an intense longing for His return, that we live the rest of our lives with no regrets.”

The program will be broadcast into churches and on the Internet for individual viewing from 6:00-9:00 pm EST and PST, Sunday, September 11, 2011. Plans are being pursued to also offer the program live on national radio and internationally via satellite television. The simulcast will originate from an historic venue once described by evangelist Dwight L. Moody as the “Pulpit of America,” Tremont Temple Baptist Church, located in downtown central Boston, the same city in which the terrorists boarded the fateful flights ten years ago.

The simulcast will be followed by an 8-week Bible study held in the simulcast host churches designed to reinforce the wake-up call.

“Prior to 9/11/11, I will be leading those who wish to participate in daily prayer for our homes, churches and nation. If churches or individuals commit now to spend the next year leading up to Sunday, September 11, 2011, praying for God’s people to humble themselves, seek His face, and turn from sin, I believe He will hear us, forgive us and heal us,” added Lotz. “The alarm has gone off. It’s time to wake up. It’s time to get right with God.”

Details are still being finalized for host church registrations. For more information on becoming a host church or finding one in your area, visit http://www.annegrahamlotz.com or phone AnGeL Ministries at 919-787-6606.

About Anne Graham Lotz
Founder of AnGeL Ministries, Anne Graham Lotz has proclaimed God’s Word worldwide for over thirty years. Referred to by her father, Billy Graham, as "the best preacher in the family," Anne has inspired listeners in arenas and prison cells, stadiums and sanctuaries, the United Nations and Amsterdam 2000. Anne launched Just Give Me Jesus revivals in the year 2000, which have been held in more than 30 cities in 12 countries. She is an award-winning, best-selling author. Her eleven books include Just Give Me Jesus and The Magnificent Obsession. Information on Anne’s ministry may be found at http://www.annegrahamlotz.com.

About Joel Rosenberg
Joel C. Rosenberg is the New York Times best-selling author of five novels and two nonfiction books, with some 2 million total copies in print. He is also the founder of The Joshua Fund, a nonprofit educational and charitable organization to mobilize Christians to “bless Israel and her neighbors in the name of Jesus” with food, clothing, medical supplies and other humanitarian relief. As a communications advisor, Joel has worked with a number of U.S. and Israeli leaders, including Steve Forbes, Natan Sharansky, and Benjamin Netanyahu. The son of a Jewish father and a Gentile mother, Joel is an evangelical Christian with a passion to make disciples of all nations and teach Bible prophecy. For more information on Joel’s ministry, visit http://www.joelrosenberg.com.