As the founder, leader, and primary arranger for the culturally omnivorous, Grammy Award-nominated Asian American Orchestra, drummer Anthony Brown is engaged in an ongoing process of re-visioning essential American musical texts from an embracing Pacific Rim perspective. On the AAO's latest CD project, "India & Africa: A Tribute to John Coltrane," Brown fulfills the saxophonist's multicultural vision by foregrounding the sources of inspiration for some of Trane's signature compositions. 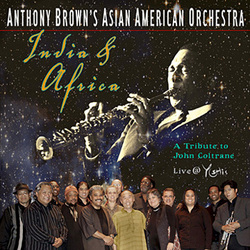 The Asian American Orchestra has extrapolated Coltrane's original vision by including Indian and African traditional instruments into these masterworks, thereby giving them a more global dimension in the 21st century

For the last dozen years, percussionist-composer Anthony Brown’s innovative Asian American Orchestra has reinvented classics of American music by composers Duke Ellington, Thelonious Monk, Charles Mingus, and George Gershwin from a Pacific Rim perspective by mixing instruments of European and American vintage with those of various Asian cultures. Now, with the September 28 release of "India & Africa: A Tribute to John Coltrane" on Water Baby Records, the 16-member ensemble brings its unique multicultural vision to 12 compositions written by and/or associated with John Coltrane.

“Although Coltrane was influenced by music globally, when he recorded ‘India’ and ‘Africa,’ he did not incorporate instruments from those cultures,” claims Brown. “The Asian American Orchestra has extrapolated Coltrane’s original vision by including Indian and African traditional instruments into these masterworks, thereby giving them a more contemporaneous and global dimension in the 21st century. This is the sound of Coltrane’s music that we are taking on our NEA-sponsored trip to Boston later this month, and what we will be celebrating when we return home to Yoshi’s San Francisco for our CD release concert and a symposium for a new book, 'John Coltrane & Black America’s Quest for Freedom: Spirituality and the Music.'”

Born in San Francisco and currently based in Berkeley, California, Anthony Brown is the son of an African-American father and a Japanese-born mother who met in Tokyo following World War II. A leading force in expanding the rhythm possibilities of jazz, Brown has collaborated over the past three decades with such giants as Max Roach, Cecil Taylor, Julius Hemphill, Wadada Leo Smith, James Newton, Anthony Davis, Tim Berne, and Sir Roland Hanna.

Brown earned a doctorate in ethnomusicology from UC Berkeley and served during the mid-1990s as Curator of American Musical Culture at the Smithsonian Institution, for which he lectured on and performed the music of Duke Ellington and others, and collected oral histories from many of jazz’s most important figures. He also served on an advisory board in revising and expanding the multi-disc "Jazz: The Smithsonian Anthology."

After several years at the Smithsonian, Brown decided to return to full-time music-making. “I soon realized that I didn’t want to be an archivist,” he explains. “I didn’t want to write about history. I wanted to have my shot at making history.”

Brown did not abandon writing entirely, however. His contribution to "John Coltrane & Black America’s Quest for Freedom: Spirituality and the Music," just published by Oxford University Press, examines Coltrane’s expanded tonal and harmonic vocabularies in the years just before his death in 1967. The chapter provided the initial impetus for Brown to begin applying his Pacific Rim perspective to Coltrane’s music.

The Asian American Orchestra will headline the 33rd John Coltrane Memorial Concert at 7:30 pm on Saturday, 9/18, at Northeastern University’s Blackman Theatre in Boston. Also at Northeastern, Brown will meet with students in the Asian American Center at 11:45 am on 9/15, and will participate in a symposium on and book-signing for "John Coltrane & Black America’s Quest for Freedom: Spirituality and the Music" in the Amilcar Cabral Center at 6 pm on 9/16.

The band will return to Yoshi’s in San Francisco at 8 pm on Wednesday, 9/29, to celebrate the release of the new CD; they had premiered India & Africa there on September 23, 2009, Coltrane’s 82nd birthday. Brown also will be featured in a panel discussion on the book at 7:30 p.m. the following night, Thursday, 9/30, in the Fillmore Jazz Heritage Center’s Media and Education Theater, which is adjacent to Yoshi’s.