The Swiss Apple (Uttwiler Spätlauber), is a nearly extinct variety found only in Switzerland. When the unpicked apples or tree bark is punctured, Swiss Apple trees have the ability to heal themselves. Once picked, Swiss Apples last months longer than other varieties. Greensations® brand skin care products has launched a new anti-aging formula using the power of Swiss Apple stem cells in their new ThermaSkin line. By combining the rare fruit extract with Capsaicin and Caffeine, Greensations has come up with a solid balm that protects the delicate stem cells from degradation which significantly decreases manufacturing costs. 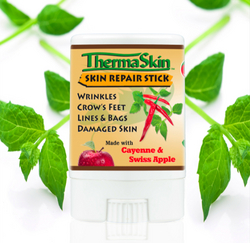 Swiss Apple stem cells are gaining a reputation as the next big anti-aging skin care ingredient for 2010.

Greensations® brand skin care products has launched a new anti-aging formula using the power of Swiss Apple stem cells in their new ThermaSkin line. By combining the rare fruit extract with Capsaicin and Caffeine, Greensations has come up with a solid balm that protects the delicate stem cells from degradation which significantly decreases manufacturing costs.

The Swiss Apple (Uttwiler Spätlauber), is a nearly extinct variety found only in Switzerland. When the unpicked apples or tree bark is punctured, Swiss Apple trees have the ability to heal themselves. Once picked, Swiss Apples last months longer than other varieties. In 2008, Mibelle Biochemistry of Switzerland found the key to this rare apples' longevity to be its unusually resilient stem cells, and they investigated whether this miracle component could be harnessed to slow the aging process in human skin. Using a special process, Mibelle developed a Swiss Apple skin care ingredient called PhytoCellTec®. Their first clinical study showed Swiss Apple stem cells provide powerful anti aging benefits by nourishing and stimulating regeneration of human skin. In a second study using 20 volunteers, the scientists found that line depth was reduced by 15% in wrinkles when used twice daily.

This revolutionary anti-aging discovery has opened up a new market for wrinkle creams and serums using Swiss Apple stem cells, but these products cost from $100 up to $1,500 for a fraction of an ounce. So throughout 2009, Swiss Apple stem cells have mainly been used by the rich and famous due to their high cost. Vogue magazine recently reported First Lady, Michelle Obama uses a $300 cream containing the stem cells to diminish her wrinkles. Unfortunately most people cannot afford to spend hundreds of dollars on an anti-aging product, but now there’s an option anyone can afford for less than twenty dollars.

“We developed a way to deliver Swiss Apple stem cells without the inflated cost, by combining them with capsaicin and caffeine in a beeswax balm. The capsaicin and caffeine act as carriers to create super permeability, allowing small doses of stem cells to penetrate skin without evaporating. We use a base of olive oil, grapeseed oil and beeswax, as well as arnica and goldenseal. Then we add the stem cells during the cooling process so they instantly bind with the capsaicin and caffeine to create a solid stick that can be applied as a roll-on. Once the liquid formula becomes solid, the stem cells are suspended in an infusion of natural beeswax. In creams and serums, most stem cells are destroyed by exposure to air, but when formulated in a solid state the cells are protected,” says Niles Porter, Director of Sales for Greensations.

When the fruit stem cells are added to traditional creams and serums, the formulation requires extra amounts to make up for natural degradation but in a solid form, much smaller amounts can be delivered directly to the skin. The result is a solid stick that contains active amounts of Swiss Apple stem cells at a much lower cost than traditional serums and creams. According to the manufacturer, the capsaicin and caffeine work together to promote fast topical absorption by increasing topical blood flow and permeability. Both ingredients also reduce wrinkles and lines on their own while tightening and conditioning skin. When combined with Swiss Apple stem cells, this caffeinated capsaicin formula goes beyond other anti-aging products to provide fast and lasting results without added preservatives or chemicals.

How It Works:
Capsaicin, the active heat component in hot peppers increases topical blood flow and reduces inflammation to tighten skin and promote fast healing. Caffeine is a proven carrier that delivers a nearly 50% absorption rate - far beyond other known topical ingredients. Topical application of caffeine has also been proven to protect and repair human skin cells from UV damage. The makers of Greensations have applied for patents using capsaicin and caffeine to increase topical absorption in a variety of natural skin care products. Their new ThermaSkin™ Skin Repair Sticks are the latest product to use their new innovation with the added touch of Swiss Apple stem cells.

“Our skin repair sticks can be used anytime just like lip balms or similar products. You can use them on wrinkles, crows feet, bags, chapped skin and even chapped lips. They can be carried in your pocket or purse and can be stored at any temperature. You can also carry them while traveling on airplanes where most liquids and creams are presently banned. Best of all, you don’t have to use your hands to apply our formula. Just use the skin stick as you would a roll-on,” Porter adds.

To learn more visit the official Greensations website. Complimentary samples are available for qualified media and medical personnel upon request.

Rare Swiss ApplesSwiss Apples could open a new door to the Fountain Of Youth for human skin care.