Letters From the Dead: Antony Flew Posthumously Defends "There is a God" Through Letters Recently Made Public

Author and Christian apologist Anthony Horvath has released letters he received from Antony Flew, world renowned atheist, who abandoned atheism in the years leading up to his death. Flew detailed his journey from atheism to belief in a book that critics contend Christians corrupted for their own interests. Flew's personal correspondence with Horvath undercuts many of the arguments attempting to get into Flew's mind, because Flew's letters themselves offer clarity. The letters have been made available in an e-book. 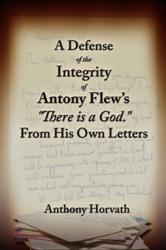 Atheists may not like the fact that a longtime ally deserted them, but that doesn't mean sanity deserted the ally. Follow the evidence; don't denigrate the man.

Dr. Antony Flew, hailed as the world’s most influential philosophical atheist, abandoned atheism in the years leading up to his death, sending shock waves throughout religious and philosophical communities. He detailed his journey from atheism to belief in a book that critics contend Christians have corrupted to further their own interests. Critics claim that Dr. Flew lost his faculties due to old age and that the book and its arguments were fabricated by a Christian apologist, that is, a defender of the Christian faith.

Dr. Flew, who died in 2010, was the foremost advocate for atheism for nearly five decades, taking on such stalwarts of faith as C.S. Lewis, another famous atheist-turned-Christian whom Flew termed "by far the most powerful of Christian apologists for the sixty or more years following his founding of [the Socratic Club]." Having yet another atheist apologist convert deals a stinging blow to the atheist cause. To this day, the attempt to marginalize Dr. Flew and his conversion rages on.

Richard Dawkins, arguably the most prominent advocate of atheism today, predictably dove into character assassination, along with many others, claiming Dr. Flew was senile and had lost his capacity for clear philosophical argument. This is to be expected from militant atheists such as Dawkins, who openly stated in March 2012 at the Reason Rally that when reason fails to sway someone to reject a god the appropriate tactic is "ridicule and contempt."

Does the criticism aimed at undoing the influence of "There is a God" have merit? Was Dr. Flew just a senile old man prayed upon and exploited by faith-mongers? Did, Roy Varghese, Christian co-author of "There is a God," put ideas and words in Dr. Flew's mouth? With the release by Anthony Horvath, author, apologist, and executive director of Athanatos Christian Ministries, of personal correspondence predating the public announcement of Dr. Flew's book, critics arguments are shown to be vacuous.

Dr. Flew's correspondence, written by his own hand long before the announcement of his book detailing his 'conversion,' puts to rest many of the assertions leveled by atheist attackers.

In the letters, Flew speaks openly about the forthcoming book, what it would be about, and the points it would make. Horvath's letters conclusively show that many of the examples insinuated to be fabrications of co-authors truly were Dr. Flew's own arguments and illustrations. They are a devastating rebuttal to atheist attacks.

Horvath says, "It is unreasonable to expect Flew to address in detail every charge that would be made about him years before they are made, especially when the number of charges came to rival the number of universes in the multiverse. I do not contend that these letters answer every charge, but there are a fair number of instances where specific challenges made by atheist critics can be decisively fought off."

Horvath has made the letters available in an e-book to set the record straight. He says, "Atheists may not like the fact that a longtime ally deserted them, but that doesn't mean sanity deserted the ally. Follow the evidence; don't denigrate the man."

Horvath gives one example, where one critic doubts the integrity of Flew's book "There is a God" because it doesn't make reference to the 'Deism of Jefferson' but in his letters, Flew does reference Deism, but cites Einstein--which is the same illustration the book gives."

The most serious charge made was that Flew was unaware of just how much of the book would be written by the co-author, but in one of the letters he writes, “What this book will also contain is a great deal, indeed by far the larger part from Christian writers.”

Horvath argues, "Pretty much every description of his book given to me by Dr. Flew himself in his letters to me matches up with what came out in the book. It is reasonable to give the rest of the book the benefit of the doubt. If Varghese got these points right, he likely got the rest right, as well."

The e-book, "A Defense of the Integrity of Antony Flew’s 'There is a God' From His Own Letters" is available for the Kindle and the Nook or directly from Horvath's web page.